We have cut further education budgets by 50%.

At the end of last night’s BBC Question Time Mr Lammy revised his claim, tweeting that the fall was between 40% and 50%. Mr Lammy’s office has referred us since to an article in The Guardian from 2015, claiming the adult skills budget has been cut by 40% since 2010.

Since 2015/16, the core adult skills budget has changed, with apprenticeship funding separated out and other adult skills funding combined into one ‘Adult Education Budget’. The new Adult Education Budget is set to fall by around 3% from 2016/17 to 2019/20, accounting for inflation, and the adult apprenticeship budget is set to increase by around 47%.

The Adult Skills Budget includes funding for classroom-based learning, adult apprenticeships and other workplace training, for people aged 19 and over. It excludes community learning (informal courses on things like IT and employability) and training for offenders in prison.

Initial allocations by the government for the Adult Skills Budget fell by 34% between 2010/11 and 2015/16, accounting for rising prices over that period.

Spending via the Adult Skills Budget, reported in the ESFA’s annual accounts, fell by around 41% over the same period.

This fall comes from a decline in funding for adult skills programmes other than apprenticeships, such as classroom-based and workplace training. The apprenticeship element of the budget actually went up over this period.

Part of this fall was due to some funding being taken out of the Adult Skills Budget and set up as separate funds. From 2013/14 grant funding for adults studying A Levels and equivalent was removed from the ASB and replaced with a separate fund for Advanced Learner Loans. A new pilot project for employer education projects was also set up in 2012/13. 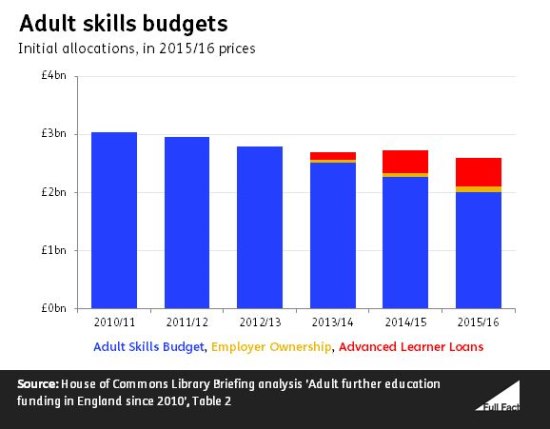 The Adult Skills Budget has since been replaced by the Adult Education Budget.

The Adult Education Budget incorporates the Adult Skills Budget along with other post-18 skills budgets, but doesn’t pay for apprenticeships.

Initial allocations for the Adult Education Budget are set to be £1.5 billion each year between 2017/18 and 2019/20. Taking inflation into account, spending will fall by around 3% over this period.

The adult apprenticeship budget—now separate to the core skills budget—is set to increase from £930 million to £1,400 million. That’s an increase of about 47% taking inflation into account. 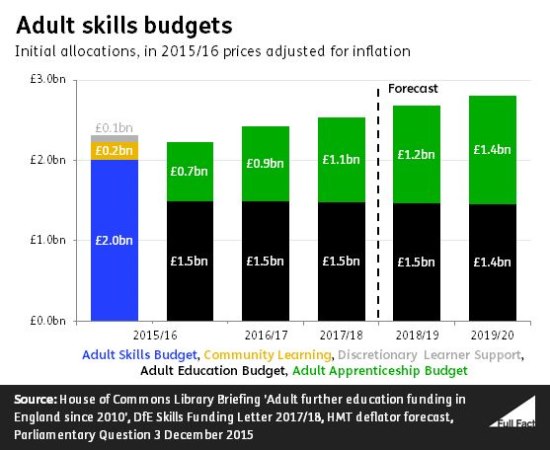 For more information about changes in adult skills budgets, the House of Commons Library Briefing explains the changes since 2010.