Politicians, unions, and journalists have recently suggested that teaching is in crisis and that many teachers are leaving or may shortly leave the profession.

While many new teachers enter the profession each year, the number of teachers that are leaving is growing slowly, especially in particular regions. But the numbers aren’t as high as recent surveys of teacher intentions would suggest.

This includes teachers retiring, taking a break from teaching such as for maternity or shared parental leave, and those leaving the state sector permanently. 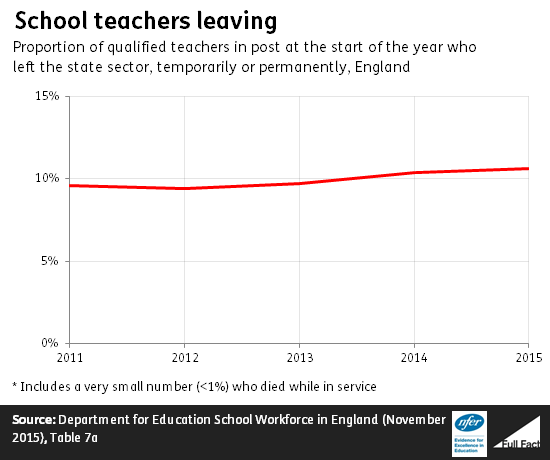 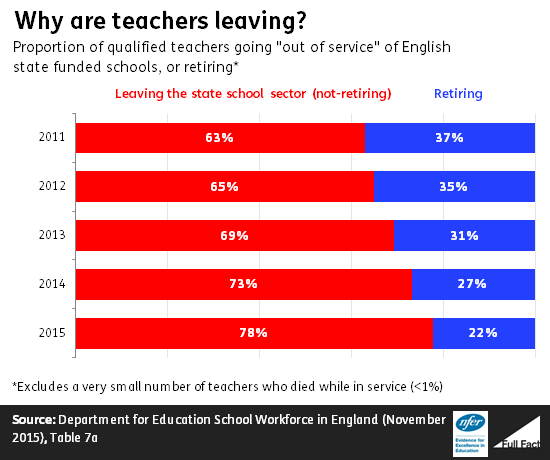 London and the South East have consistently seen the highest proportion of qualified teachers leaving, according to a recent government report.

In London the teachers that are leaving are more likely than in other parts of the country to be of working age, rather than retiring. In England overall around eight in 10 teachers who left mainstream primary and secondary schools in 2015 were of working age (80% of primary leavers and 78% of secondary leavers). This is less than the nine out of every 10 teachers in Inner London (89% primary and secondary).

Teacher numbers are going up in primary and down in secondary

In secondary schools, pupil numbers are starting to increase, having fallen over the past decade. So the pressure is now on secondary teacher numbers to increase as well.

Similar numbers leaving and entering teaching in the state sector

So does this mean more teachers are leaving than entering? It depends how you measure it, but in short the numbers are pretty even.

But it’s the opposite way around if you adjust the teacher numbers for the number of hours individuals work. About 42,100 left and 45,800 entered on this basis.

Where are the teachers who leave going?

Not all qualified teachers who leave do so permanently. We know that some of the teachers leaving each year do come back to teaching in the state sector after a period of time. 17,200 teachers re-entered the workforce in 2015, up from 14,700 in 2011.

Teachers leaving also tend to go on to non-teaching roles in schools, going to teach in private schools, or becoming a teaching assistant. Not all teachers are permanently leaving the profession, or the education sector.

Much of the recent coverage of the teacher retention crisis has focused on surveys of teachers. These tend to ask if someone has, or is considering leaving within a set period.

Anywhere from 20% to 59% of teachers reportedly considered leaving in 2015, according to three surveys that year.

That’s much higher than the 10% or so of all qualified state teachers who left in 2015.

So the figures suggest that many more consider leaving the profession than actually have left so far. 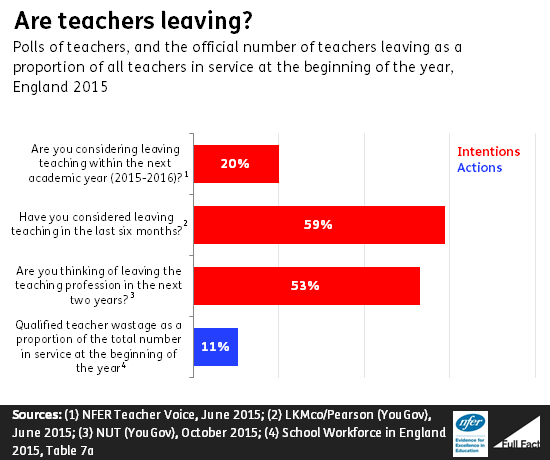 This briefing was written by Zoe des Clayes of the National Foundation for Educational Research in collaboration with Full Fact.