A third of teachers leave after five years - that's nothing new

A third of teachers leave state education within five years of qualifying according to new figures.

That is correct, but the figures haven’t changed a great deal for the last 15 years.

“Almost a third of teachers quit state sector within five years of qualifying”.

“Nearly a third of teachers who began work in England's state schools in 2010 were not in the classroom five years later, official figures show.”

It’s a story you may have seen.  It’s certainly been featured in almost every major newspaper this week after the figures apparently came to light when a Minister in the Department for Education  provided the information to a fellow MP.

But the fact that a third of teachers leave state schools five years after qualifying isn’t new. It’s been very close to that for the last 15 years.

Information on how many teachers remain in state schools in England each year after they have qualified is published annually and goes as far back as 1996.

Although the number of teachers qualifying has been generally increasing since figures began in 1996, the drop-off rate after this period has remained roughly similar. There have been changes in when the data is collected, so the comparison over time isn’t perfect.

They might also come back to work in state schools in England again later in their career. The figures don’t tell us what proportion of teachers do this, but they do tell us that they still count teachers who don’t have “continuous service”. 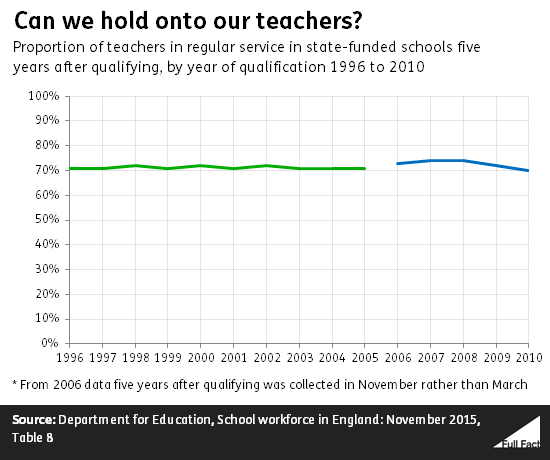