Fee-paying schools ‘save the taxpayer £20 billion’.

Incorrect. A report estimated that educating privately-schooled children in state schools would cost £3.5 billion per year.

“Fee-paying schools ‘save the taxpayer £20 billion’,” 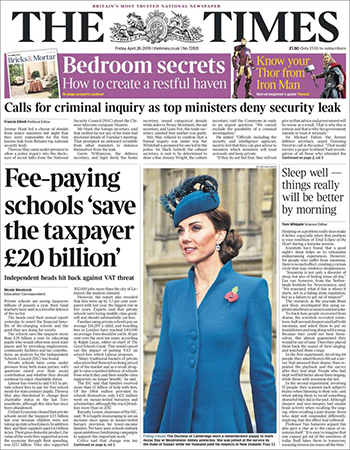 The Times last week reported the eye-catching finding on its front page that independent schools in the UK save taxpayers £20 billion per year.

The figures come from a report by the consultancy group Oxford Economics for the Independent Schools Council, which actually estimates the taxpayer saving to be £3.5 billion per year.

The report also estimates the contribution of independent schools to the UK economy, and the Times added this to the £3.5 billion figure to get a total taxpayer ‘saving’ of £20 billion. But this calculation is flawed because some of the money is counted twice or even three times. Oxford Economics confirmed to us that much of it can’t be counted as a “taxpayer saving”.

How the £20 billion figure was calculated

The first element of the £20 billion is the £3.5 billion Oxford Economics estimates it would cost the state per year to educate students who are currently independently schooled. The majority of this is day-to-day spending (like teacher salaries) and the remainder is an estimate for capital spending (like spending on new buildings or land for new schools). Oxford Economics calls this a “taxpayer saving”.

As with all these figures, this is only an estimate (and we’re not looking in detail at Oxford Economics’ methodology in this article). For example, it assumes that all independently schooled pupils would need to be educated in newly-built school sites—which wouldn’t necessarily have to be the case.

In addition to that £13.7 billion of pre-tax spending is an estimated £4.1 billion of associated tax. Most of this is the income tax and national insurance contributions of school employees or employees in other sectors supported by school spending.

Adding the £3.5bn, £13.7bn and £4.1bn gets you to around £21.4bn. But adding these numbers up and describing that figure as “taxpayer savings” is wrong on many levels.

Firstly, it is wrong to describe most of this money as taxpayer savings.

Oxford Economics, who published the report, say private schools generate “total quantifiable taxpayer savings” of £3.5 billion per year (that’s the calculation of what it would cost the state to educate the students instead).

In getting a figure of £20 billion, the Times included the estimated £13.7 billion of economic activity by independent schools and the businesses and people they support. But the amount of money going into the economy as a whole is not the same as taxpayer savings.

They also count the estimated £4.1 billion of tax revenue derived from spending by independent schools. But much of that spending would also have to occur if the pupils were educated by state schools instead, and so tax revenue would still be generated.

Some of the money is double or triple counted

Secondly, you can’t add up these figures and describe the result as the “economic benefits and taxpayer savings” of independent schools, as the Times did in its article.

That’s because, as we’ve noted already, it double counts (or even triple counts) money across the three figures.

For example, the “taxpayer saving” of £3.5 billion estimated by Oxford Economics includes the salaries the state would need to pay teachers to educate these children. But teacher salaries are also part of the £13.7 billion independent schools put into the economy, and contribute to the £4.1 billion they put into taxes, directly or indirectly. So if you just add up all three figures, you’re effectively counting some of the same (or equivalent) money three times over.

Finally, it’s important to stress that—apart from the £3.5 billion estimated taxpayer saving—these figures estimate the existing contribution of independent schools, not the amount that would be lost if they didn’t exist.

So while you could argue the independent school sector contributes £13.7 billion to GVA currently, it’s important to note that this doesn’t mean the national GVA is £13.7 billion higher because of them.

We got in touch to request a correction regarding a claim made in The Times.