As of September 2012, schools wanting to appoint someone on the basis of their special skills and experience no longer need to consider whether or not there's a teacher with qualified status available. Academies were also given freedoms to employ teachers regardless of whether they were qualified.

The government say the reforms give schools the freedom to "appoint the right people to teach their pupils" and provide academies with the freedom to employ professionals who "may be extremely well-qualified and are excellent teachers, but who do not have QTS status".  These moves have been criticised by the Labour party for 'harming standards'—pointing to an increase in the number of unqualified teachers.

Although the numbers are marginally up, this could be considered a return to the previous levels; from 2005-2009 (when the figures were measured in a slightly different way until it changed in 2010) the number of unqualified full-time equivalent teachers never dropped below 17,000. So it's too early to say whether the 2012 rule change has had any long-term impact on the hiring practices of schools. 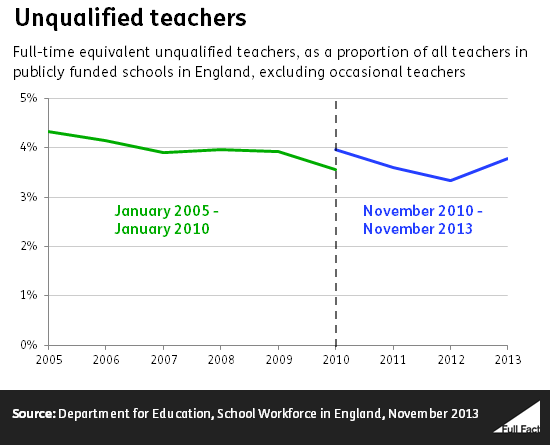 What's meant by a qualified teacher

When we refer to a qualified teacher, we mean someone who meets the requirements for 'qualified teacher status' (QTS). This can be through undergraduate or postgraduate study, the relatively new School Direct route, where training is delivered through a group of schools and the person learns "on the job", or through Teach First, another route where trainees are placed in classrooms from early in their training.

So an 'unqualified teacher' is someone who has not passed the QTS process in England. It doesn't necessarily mean that person can't teach, or that they have no teaching experience or qualifications. Teachers in private schools do not need QTS, so a teacher switching from the independent sector to the state sector is counted as an unqualified teacher. And teachers who are already qualified abroad are technically unqualified in England, though they may be eligible to for QTS without further training, depending on the country they trained in.

Independent schools have always been free to employ unqualified teachers, while state schools in England have typically been restricted.

But exceptional circumstances for employing unqualified teachers were identified and permitted in 1993, and that was expanded in 1999 to include the Graduate Teacher Programme, which allowed trainee teachers to be employed by a school during training.

Further relaxation of the rules in 2003 brought in even more exceptions:

In Wales, the situation is similar to England: state school teachers must have qualified teacher status and be registered with the teaching council, but schools may employ unqualified teachers in certain circumstances. In Scotland and Northern Ireland, teaching councils are ultimately responsible for deciding who can teach in state schools (the individual schools make the call in England).

Since their inception in 2010, free schools have always been able to employ unqualified teachers. Until 2012, academies were bound by the same rules as maintained schools in their funding agreements, but after a change in 2012 academies can now employ anyone they deem suitable.

Combined science teachers the most qualified for their subject

Recent press coverage has focused on teacher shortages, particularly for key subject areas such as maths, physics and design and technology.

But how 'qualified' are teachers anyway?

Nearly 80% of maths teachers have a relevant degree yet less than half of modern language teachers have one (arguably being fluent in the language is more relevant than a degree). 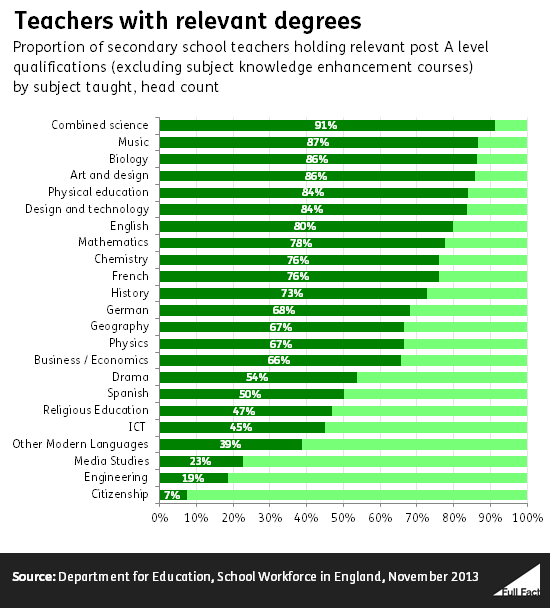 For many subjects there are several degree courses which are seen as relevant. A position to train as a physics teacher could be taken by a graduate from a number of disciplines including engineering and astronomy, for example. The full list of relevant subjects is available here.

Applicants can also get a place on a teacher training course if they're willing to take a 'subject knowledge enhancement' course (although these are only available in certain subjects), which these qualification figures don't include.

There doesn't seem to be much systematic evidence to say if qualified teachers are any better or worse than unqualified ones.