Where do UK applicants to Oxford University come from?

Correct, looking at applications from, and offers to, UK-domiciled potential undergraduates between 2015 and 2017.

This is correct. Figures published by Oxford University show that between 2015 and 2017 around 9,200 undergraduate applications were made to Oxford by students from Greater London. Of these around 2,200 offers were made (24% of the total number of applications) and 1,900 students took up their place (21% of the total).

Applications from Greater London made up just over 25% of all applications from the UK in those three years. Meanwhile around 13% of the total UK population lives in Greater London—based on 2011 census figures. This proportion is similar looking at the numbers of 18 and 19 year olds in the UK.

Around 17% of all UK applicants to higher education institutions in the UK were from London in 2018.

Between 2015 and 2017 there were around 700 applications to Oxford from students in the North East of England. Of these around 200 offers were made (28% of the total applications from there) and just under 200 were admitted (25%). 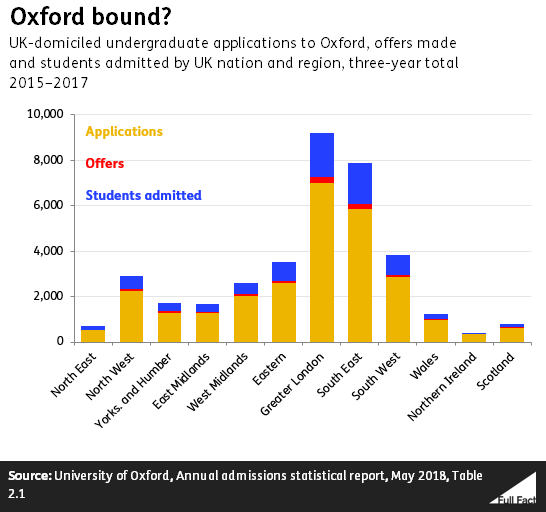 Looking at the difference between the proportion of applicants from each region in the UK and the total share of the UK population that region made up, students from Greater London were most overrepresented among applications and admissions to Oxford, while students from Scotland were most underrepresented. 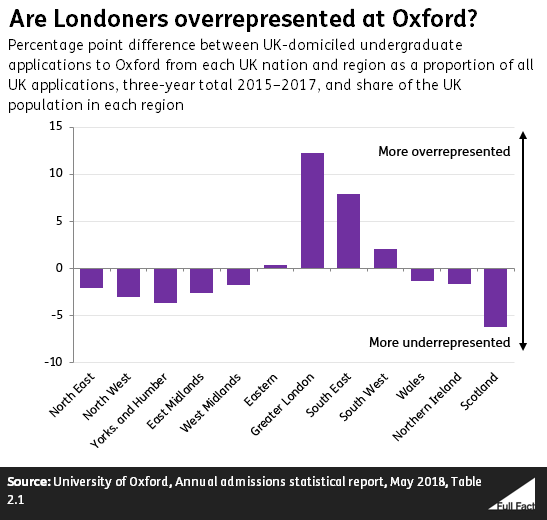