This article is from our archive. It was originally published 5 years ago. More details.

The number of people from disadvantaged backgrounds going to university has gone down.

There are a number of ways to measure what a ‘disadvantaged pupil’ is, but on all UCAS measures young students from disadvantaged groups in England are more likely to go to university now than any other year on record. The picture may be different for other types of students, such as mature students or part-time students.

“What we are seeing right now through the tuition fees policy is actually it's giving the support to many of those that could not get access to university education, those from disadvantaged backgrounds and they’re the ones we should be targeting and supporting to get into university.”

“But that number's gone down”

We're focusing here on participation rates in higher education, and looking at what's happening in England, as the two politicians were debating the impact of an increase in tuition fees in England. And we’re using UCAS figures for the number of young people who've been accepted for a place at university, as these are the most up to date numbers.

We’ve asked the Labour party what Ms Rayner was referring to when she said the number had gone down. From the measures we’ve looked at, more disadvantaged students than ever are going to university.

More young people from disadvantaged areas are going to university

In 2016 the entry rate for 18 year olds living in the most disadvantaged areas increased to the highest on record—19.5% for England.

The rate for those in the most advantaged areas in 2016 increased slightly to 46.3% in England. 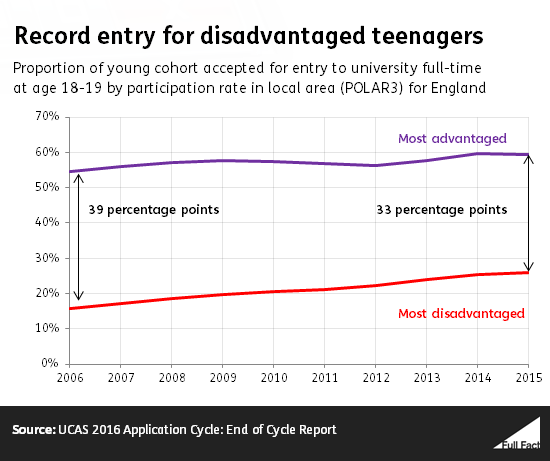 UCAS have released data on a new measure: the ‘multiple equality measure’ (MEM), for the first time for 2016.

This looks at things like a person’s sex, ethnic group, where they live, whether they  to a private or state school, and whether they received free school meals—all factors which have traditionally affected whether someone is likely to go to university. Based on a combination of these factors 18 year olds are placed into one of five groups. ‘MEM group 1’ is the most disadvantaged and ‘MEM group 5’ is the most advantage.

On this measure all 5 MEM groups have seen growing participation rates, and reached record highs in 2016. 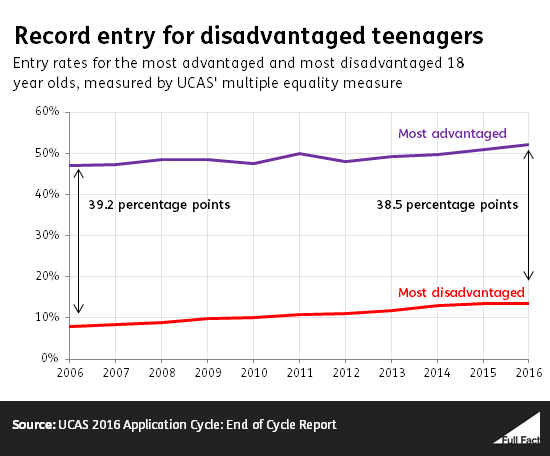 On the MEM measure the gap between the participation rate of the most and least advantaged pupils decreased slightly between 2006 and 2016 (-0.7 percentage points).

We don’t know for sure how the participation in higher education of disadvantaged groups would change if a policy to scrap tuition fees was adopted.

The IFS has said that, as higher earning graduates currently repay the most of their loans, it is these graduates who would benefit the most from not having to out take a tuition fee loan.