A&E waiting times have hit their worst levels on record

Correct, looking at data which goes back to 2010.

The Guardian, 14 November 2019 (headline since amended)

On Thursday many media outlets reported that A&E waiting times had hit their “worst ever level”. This is technically correct, but it’s worth noting the data only goes back to 2010. The Guardian later changed their headline to “A&E waiting times in England at their worst on record”.

In October 2019, 83.6% of patients attending all types of A&E departments (including things like dental A&E and urgent care centres) in England were admitted, transferred or discharged within four hours. That’s the lowest level on record, going back to 2010.

There’s also quarterly data going back a few years further to 2004, which isn’t strictly comparable as it does not contain month-by-month data. But it does show that at least 95% of patients were seen within four hours in every three-month period between July 2004 and the end of 2012.

If you just look at attendances at major A&E departments, it’s 74.5%, which is also the lowest since records began.

The NHS’s current target is that 95% of patients should be seen to within four hours. The target hasn’t been met since 2015, and the proportion of patients waiting more than four hours has grown consistently in the last few years. 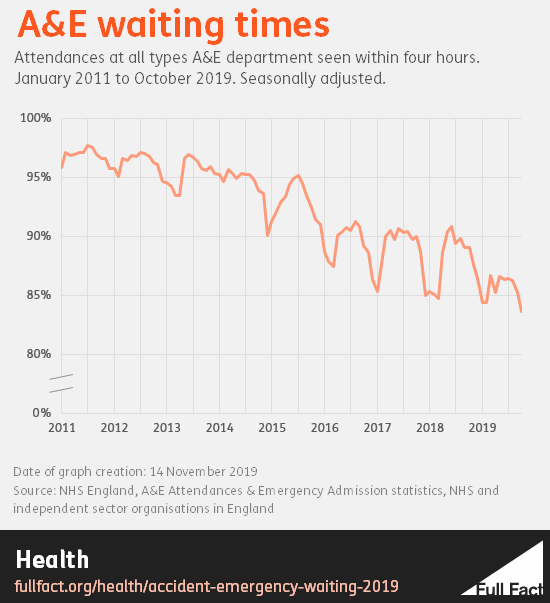