Brexit and the great British pub

Beer sales at British pubs have risen after the vote to leave the EU.

This is wrong. The figures available mostly cover the period before the referendum, and show that pub sales actually fell, although overall beer sales rose.

"Are we in a post-Brexit PUB BOOM? Beer sales on the UP over recent months... Britons have been returning to pubs in their droves."

The Express suggests that we’re enjoying a "post-Brexit pub boom" and that Britons have been "returning to the pub in their droves".

But the figures it quotes show that while beer sales rose overall, less of that business was done in pubs. In any event, only a few days’ worth of those sales were made after the referendum.

But the overall figure masks a different picture for pubs, bars and restaurants themselves. They pulled 19 million fewer pints in April to June of this year than they did in last year’s equivalent period.

This dip was only offset by rising beer sales in shops and supermarkets.

They sold an extra 50 million pints—1.25% more than in the same period last year.

And even if pub sales had been booming, we wouldn’t know if it was actually a ‘post-Brexit’ trend or not. Britain voted to leave the EU on 23 June, but these sobering sales figures cover either side of that date: from 1 April to 30 June.

In other words, we don’t know if Britons had celebrated or drowned their sorrows at pubs in the aftermath of the EU referendum any more than usual.

The BBPA attributes the rise in overall sales to the European Football Championships, as well the effects of recent reductions in beer duty.

But neither that overall rise, nor the fall in ‘on-trade’ sales, are particularly significant in the grand scheme of things. The 1.5% overall bump is the smallest second quarter change—in either direction—since 2003, while the 1.9% drop in on-trade sales was the least significant shift in a decade. 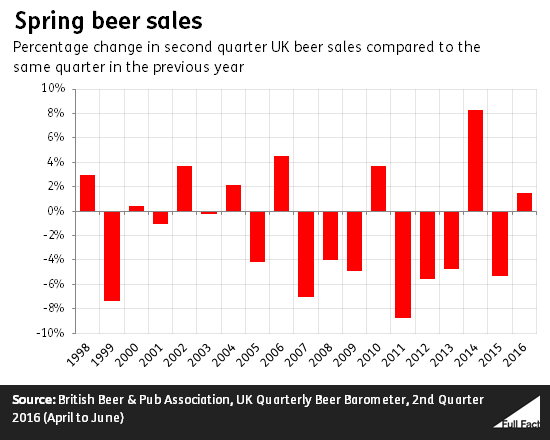