Our Brexit divorce bill will probably be paid off by 2064

The UK will be paying the Brexit divorce bill until 2064.

Correct. The majority of these payments will be made by 2021.

“We are going to be paying until 2064, apparently”

This is correct, according to estimates released this week about the Brexit “divorce bill” from the Office for Budget Responsibility (OBR).

The joint statement from the UK and EU published in December—at the end of phase one of the Brexit negotiations—set out the details of the Brexit bill the UK will have to pay. Until 2020 the UK will continue contributing the the EU budget “as if it had remained in the Union”. After that it will continue paying towards any commitments it has or outstanding liabilities (for example pensions).

Based on this agreement the OBR estimates that the final cost of the Brexit bill will be around £37 billion in total. 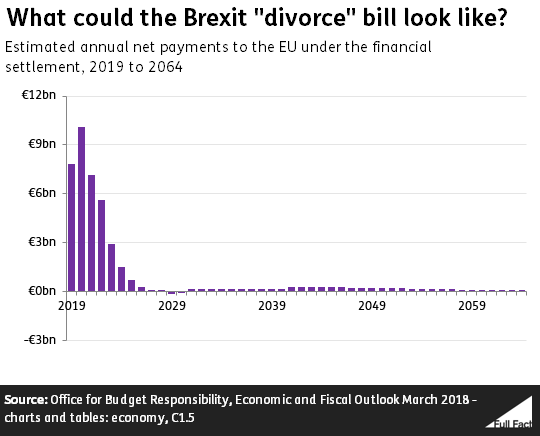 We’ve written more about the Brexit “divorce bill” and previous estimates for how much this might cost here.