British students and the EU

"Over 200,000 students have studied or worked abroad under the Erasmus education programme since its establishment in 1987. In fact, just shy of 15,000 UK students studied in the EU in 2012 alone"

14,600 British students went abroad under the Erasmus exchange programme in 2012/13, the vast majority to France, Spain or Germany. Around a third of these were on a work placement.

Those taking part represented roughly half a percent of the UK student population, according to the EU's own figures.

Almost twice as many European students came to the UK under the Erasmus programme as went abroad from here. 27,100 Europeans studied at a British university in 2012/13. 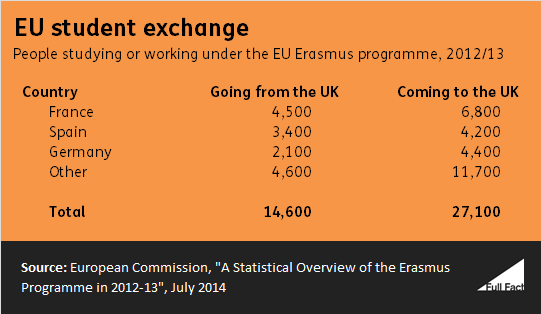 We haven't found any more recent statistics than 2012/13. This may be because the scheme was folded into a larger EU programme from 2014, called Erasmus+.

All this will cost around €15 billion by 2020, of which a billion is expected to go to the UK.

Last year around €113 million in Erasmus+ funding was awarded to the UK.