Cash for asylum seekers: hard to say whether we give more

"According to the Asylum Information Database, asylum seekers in France receive up to £56.62 a week. Germany and Sweden—the two most popular migrant destinations—pay out £35.21 and £36.84 a week respectively, only fractionally less than Britain."

Much virtual ink has been spilled, in the context of migrants at Calais, on what's available to asylum seekers in other European countries. As the two examples above show, there doesn't seem to be much agreement on how much those applying for refugee status get by way of a subsistence allowance.

We don't fully agree with either of them; weekly rates in the likes of France, Germany, Sweden and the UK are actually very similar. But the comparison isn't all that meaningful, partly because it's hard to make like-for-like comparisons between different systems, but also because the raw numbers don't tell you what you can get for that money in each country. The Norwegian rate is high, but Norway is expensive.

The first set of figures given above took a circuitous route to Twitter fame and fortune. They were submitted to a parliamentary committee in 2013 by a coalition of charities, who compiled them using a report by the EU's European Migration Network published in March 2012.

Whether or not they were accurate at the time, they aren't the most up-to-date figures. A similar report was published in April 2013. A country-by-country comparison was published using that data.

It shows that France and the UK had similar rates at that time for a single person after accommodation (€47 vs €43).

Many outlets, in common with the Guardian, are suggesting that asylum seekers in France get a much higher rate, around £55, or €80, per week.

They're not comparing like with like. A rate at about this level ('temporary waiting allowance') exists, but only for asylum seekers who haven't been given accommodation in the regular reception centres in France. Around two-thirds of those entitled to such a place don't have one.

Some are housed in emergency accommodation, but for others this allowance has to cover rent. Britain's rate, by contrast, is on top of the cost of accommodation in most cases.

And as the BBC does point out, "the French state provides no [extra] money for children", whereas the British system gives additional allowances for families with kids.

So a better comparison is with France's 'monthly subsistence allowance', for asylum seekers who do have a place in a reception centre. As with the example we've already cited, this shows the support rates as quite similar.

The monthly subsistence allowance varies a lot depending on number of family members and whether or not they cook communally, but for a single person with no children in individual catering it currently works out at £32.39 per week—lower than the comparable UK rate of £36.95. A new law has just been passed that will change this system entirely, and we're told by French refugee organisation Forum réfugiés-Cosi that new rates are likely to apply from November 2015.

Support in other European countries is similar, at current exchange rates, although in Norway it's much higher and in Portugal it's lower than in other western European countries. The Guardian is correct to say that Germany and Sweden allow asylum seekers "fractionally less than Britain". 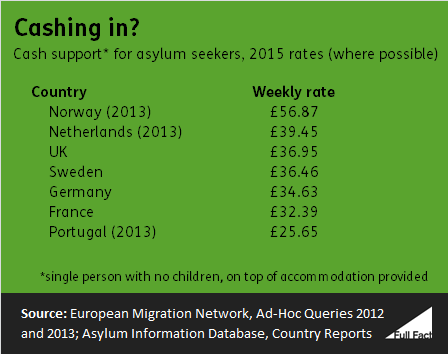 Our chart is pretty similar to the picture given in 2013, except for Germany which has changed its support rates several times in recent years due to court rulings.

But there are serious limitations on how much this tells us. For one thing, the money will go further in some countries than others. Asylum seekers in Norway get a lot more per week than in the UK; but a litre of milk there costs about £1. That would go twice as far in Tesco.

And subsistence allowances also don't tell us about asylum seekers' access to the likes of healthcare, education, employment, integration programmes and one-off supplies on arrival, which vary across the EU.