David Cameron set out his vision for a "Greater Britain" in his speech to the Conservative party conference today.

We've taken a look at some of his claims in topics ranging across Osama Bin Laden, Syria, affordable homes, social mobility, families and poverty.

"Thousands of words have been written about the new Labour leader. But you only really need to know one thing: he thinks the death of Osama bin Laden was a "tragedy"."

As has been pointed out elsewhere, the comment is quoted out of context. Jeremy Corbyn said it was a tragedy he had been killed rather than being arrested and put on trial.

It's based on comments he made in 2011 after Osama Bin Laden was killed. He said:

"Twelve million people have been made homeless by the conflict in Syria. And so far only 4% of them have come to Europe. If we opened the door to every refugee, our country would be overwhelmed."

We're waiting to hear the Conservatives' source for this figure. 4% does seem about right as of August, although the picture is constantly shifting as increasing numbers of migrants and asylum seekers arrive in Europe.

The United Nations refugee agency estimates that "less than 10% of Syrians who have fled the conflict have sought safety in Europe". But this seems to be taking into account only people who actually left Syria—very roughly, 400,000 applied for asylum in one of 37 European countries between April 2011 and August 2015, whereas there are 4 million refugees registered in places like Turkey, Lebanon and Jordan.

When the UN made this comparison in July 2014, the proportion was 4%.

A better assessment of what Mr Cameron was saying would take into account all people who have either fled Syria or have been internally displaced within its borders. They aren't all necessarily "homeless", as such, but are likely to have left their original home.

Another UN agency estimates that 11.7 million Syrians are affected in this way. Again, if we take the number of recorded Syrian asylum applications in Europe to date as a proportion of that, it's around 4%.

The key word there is "recorded"—as we've discussed elsewhere, the increasing pace of migration into Europe in just the past few months, as well as the time lag between arriving and formally applying for asylum, means that there could be a large number of Syrians physically present in Europe who haven't yet shown up in these figures.

The UK alone, of course, has received a minute proportion of the "homeless" Syrian population. Around 7,000 applications for asylum in the UK have been received from Syrians since the beginning of 2011, with another 216 people resettled from among the 4 million in the region. The government has announced an expansion of that resettlement scheme, to cover an additional 20,000 people over 5 years.

"As we do this, let's remember: we haven't only just started caring about Syrians. We've been helping them over the past four years, giving more in aid to that part of the world than any other country except America."

This claim is correct, again according to the United Nations.

It gives details for "total funding (appeal and non-appeal) to the Syria crisis" over the past four years. At over $1.5 billion, the UK has contributed more than any other individual country bar the United States.

It's slightly less than the European Commission, which gets money from the UK through the EU budget.

"For years, politicians have been talking about building what they call 'affordable homes'—but the phrase was deceptive. It basically meant homes that were only available to rent."

As a share of all new housing in England officially deemed 'affordable', homes available to buy have been a minority—albeit a significant one. It's by no means correct to say that we have only been building affordable homes to rent.

Affordable home ownership schemes have accounted for between 27% and 40% of the new affordable housing stock built over the past five years, according to the Department for Communities and Local Government.

The rest have been various forms of homes available for rent below the market rate. 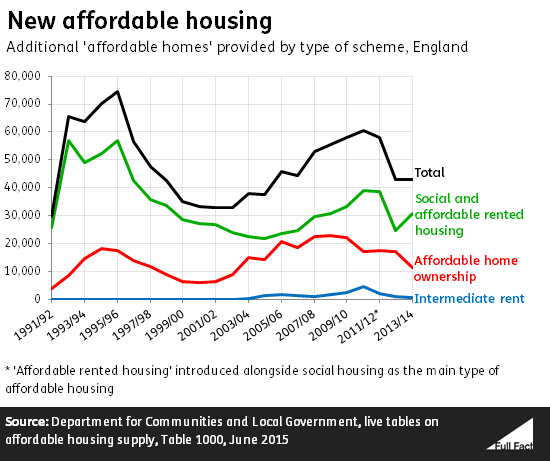 "Britain has the lowest social mobility in the developed world. Here, the salary you earn is more linked to what your father got paid than in any other major country."

We haven't heard back from the Conservatives about what evidence Mr Cameron is using here.

The piece of research we've seen quoted before to evidence this or similar claims is a study published by the OECD in 2010. Using data from 2006 and 2007 it found that a man living in Britain had the strongest likelihood of ending up with similar earnings to his dad than those living in any of the other 11 OECD countries included in the research (out of about 30 members at the time).

Dr John Jerrim at the Institute of Education has raised concerns about this approach, saying that different measurements of income mobility across different countries means the data just isn't of high enough quality to make comparisons.

His research, which looked at the impact of parents' education on children's wages, found that there wasn't a particularly strong link in Britain compared to most other countries.

We've got more information in our social mobility briefing.

"Today, a teenager sitting their GCSEs is more likely to own a smartphone than have a dad living with them."

Again, the Conservatives haven't confirmed their source for this. The Centre for Social Justice made this claim in a report published last year, where they said that 57% of 15 year olds were still living with their fathers, compared to 62% who owned a smartphone. The report didn't state which year this 57% figure refers to.

It comes from their own analysis of census and household data. It's not clear from this figure how many of the remaining 43% aren't living with their fathers specifically, compared with those not living with either parent.

Smartphone ownership among this age group rose to 65% in 2014, but ownership of any type of phone (including less high-tech hand-me-downs) has fallen.

"But it's not enough simply to have a job: work has got to pay. Nearly two-thirds of children in poverty have parents who are in jobs. For them, work hasn't worked."

The statistic is mostly correct (for the latest figures for 2013/14) and refers to the relative measure of poverty and includes the costs of housing. A child only needs to be in a household where one adult is in work to count, so it's not necessarily both parents who have jobs.

"We made a start in the last five years with our Troubled Families programme. It's already turned around the lives of over 100,000 families."

The Troubled Families programme (which only runs in England) has provided additional support to a number of families, but it's hard to measure how many of them have been 'turned around' as a direct consequence.

A family is said to be 'turned around' if it meets one of two targets: either having one adult in the household in continuous employment or all children in the household consistently going to school for one academic year, and the family linked to less anti-social behaviour or youth crime.

But some of these families might have met these targets even without additional government help, and other interventions would have taken place without the Troubled Families programme.