Is the EU’s budget ‘signed off’ by auditors?

The EU’s accounts haven’t been signed off for years.

Auditors say the accounts have been accurate since 2007. But they have historically recorded significant errors in how money is paid since their first audit in 1995. In the most recent year, they found a significant part of the EU’s spending was largely error-free for the first time.

It’s often argued that the EU’s budget both has and hasn’t been signed off by auditors for years.

Both sides have a point. The EU’s Court of Auditors regularly “signs off”—in its own words—the reliability of the accounts themselves, and has given them a clean bill of health for the last decade.

But it has consistently found significant errors in how the money is paid out since it began giving opinions in 1995, for the 1994 EU financial year.

The exception to this is the most recent year. The latest report has, for the first time ever, found a significant amount of payments to be largely error-free. It found that “Payments for 2016 were legal and regular, except for cost reimbursement payments”.

Two opinions, not one

The European Court of Auditors checks the EU’s accounts and delivers verdicts on them annually. It actually gives two different opinions on them: whether they’re accurate and reliable, and to what extent there’s evidence that money is being received or paid in error.

The auditors give a clean opinion on the accuracy and reliability of the accounts when they present a true and fair view of the EU’s finances and follow the rules of financial reporting. This has been the case since 2007.

If they’re mostly fine, but have some problems, the auditors give a qualified opinion. This was the case before 2007. If they have extensive problems, they give an adverse opinion on the reliability of the accounts. This has never happened.

The same opinions are delivered on the ‘regularity’ of the accounts— mainly whether the payments are free from significant errors. Until 2016, the Court of Auditors had always given an adverse opinion on this ever since it started giving opinions in 1995.

However, the most recent report gives a qualified opinion that “A significant part of the 2016 expenditure audited was not affected by a material level of error”. 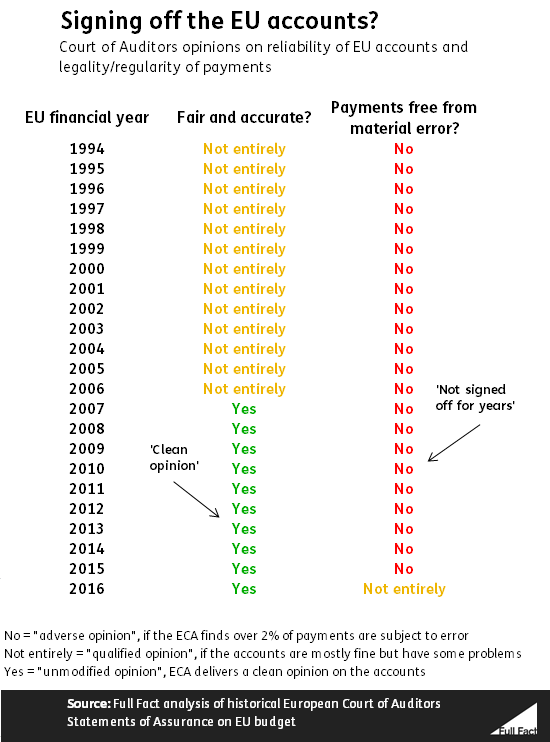 So what does all this say about the EU’s accounts? The numbers accurately reflect what’s actually happened—it’s just that some of it shouldn’t have happened in the first place.

Accurate in 2016, but errors persist

In 2016 the EU spent €136 billion—or about £110 billion, at the average exchange rate for 2016. That's a few billion less than what the UK spent on the NHS. The Court said the EU’s accounts in 2016: “present, in all material respects, a true and fair view of the EU’s financial results for the year and its assets and liabilities at the end of the year.… We were therefore able to give a clean opinion on the reliability of (i.e. ‘sign off’) the accounts, as we have done every year since 2007.

But it did find that 3.1% of EU spending was subject to error. This is slightly lower than in previous years, but as long as the estimated error is above a threshold of 2%, it’s considered “material”.

However, the “entitlement payments” (rewards for meeting conditions, rather than payments for costs incurred) were found to have an error level below the 2% threshold.

This meant that, for the first time since 1994, the accounts were given a “qualified”, rather than “adverse”, opinion. The auditors found that: “A significant part of the 2016 expenditure audited was not affected by a material level of error”.

Error is not always the same as fraud or waste

Just because some money is paid in error doesn’t mean people all the people involved have deliberately tried to defraud the EU.

A small minority of the cases that the auditors look at each year involve suspected fraud. The UK’s Public Accounts Committee of MPs has concluded for years that the complexity of the EU’s spending programmes, which creates misunderstandings, contributes towards these errors.

It also doesn’t necessarily mean the money was ‘wasted’, just that it wasn’t paid out according to the rules. One way to run afoul of the rules, for instance, is to award an EU-funded contract directly without holding a proper bidding process. Even though the rules haven’t been followed, it's not always the case that another firm would have been able to put in a lower bid.

The most common type of error is when people claim for costs they’re ineligible for, followed by procurement errors like the one discussed above.

It’s not all the EU’s fault, and it gets some of the money back

While the EU is ultimately responsible for its own budget, the majority of the spending is implemented by member countries. Both the EU and member states make similar amounts of error.

In the UK’s case, the Public Accounts Committee has criticised the government for designing programmes which add to the complexity of EU spending, and showing a “distinct lack of urgency” in tackling that complexity and reducing the penalties the UK needs to pay back to the EU.

It can take the EU several years to make corrections to the money paid out in error. It estimates that between 2009 and 2015 it recovered just over 2% of the average payments.