Did more people in London vote to leave the EU than for Sadiq Khan?

More Londoners voted for Brexit than for Sadiq Khan as mayor.

In Greater London, there were around 200,000 more votes for Brexit than first and counted second votes for Sadiq Khan in the London mayor elections. Counting all votes for him (including those that didn’t contribute to his final win) he got 20,000 more votes.

“Sadiq, more Londoners voted for Brexit than for you…”

This image, published by campaigning group Leave.EU, has been shared more than 7,000 times on social media at the time of writing. 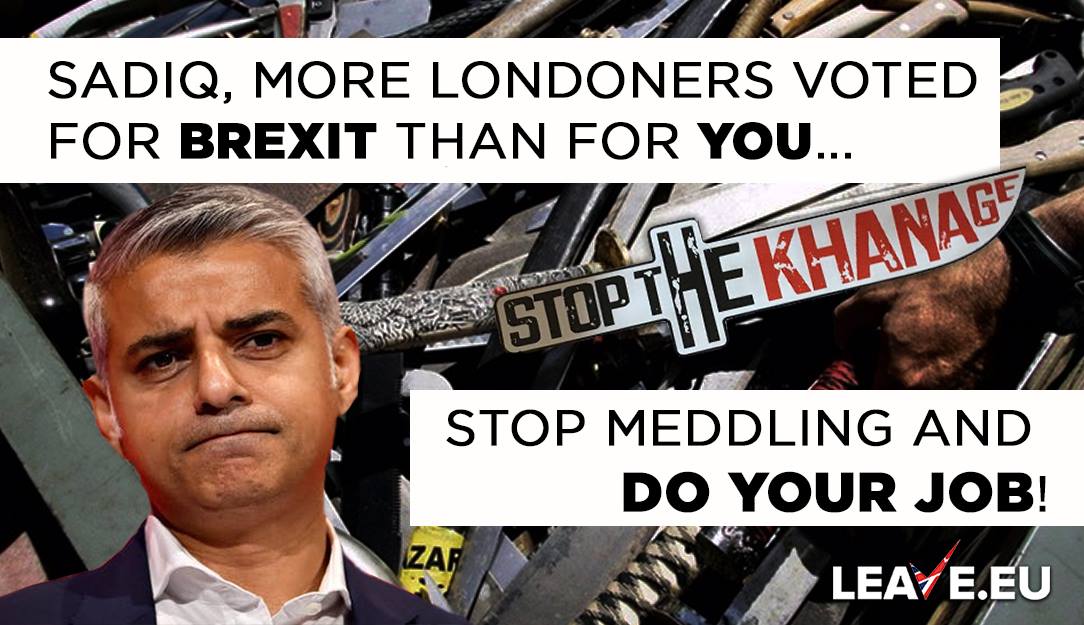 The image is comparing two different types of election—the 2016 EU referendum which had only two options for voters, and the London mayoral election the same year in which voters were allowed a first and second vote for mayor from a range of possible candidates.

Around 200,000 more voters in London opted to leave the EU than voted for Sadiq Khan, counting both the first and counted second votes for him. Counting the total number of first and second votes he got, not just those that were used in the deciding total, he got around 20,000 more than leave did.

I know how you voted last (last) summer

Despite being just a month apart, the two votes were very different.

The EU vote was a yes/no referendum, while the mayoral election used the supplementary vote system. Voters could choose a first and second preference, then if no candidate got more than half of the first preference votes, the two most popular candidates went through to the second round. Then, second preference votes (where the first vote was not for one of the two most popular candidates) were added to their totals in order to decide who will be elected.

Who or what got more votes?

Counting both first and valid second votes in the mayoral election, Sadiq Khan received 200,000 fewer votes in London than leaving the European Union did.

Sadiq Khan got 1.3 million first and valid second preference votes (Conservative candidate Zac Goldsmith came second with around 995,000) in the mayoral elections in May 2016. A month later, 1.5 million people in Greater London voted to leave the EU. 2.3 million voted to remain.

Sadiq Khan got 57% of the total first and valid second votes for the two main candidates, and Zac Goldsmith got 43%. In the referendum, 60% of votes in London were to remain in the EU, while 40% were for leave.

But if you count the number of first and second votes that Sadiq Khan got in total, not just those that contributed to his final win, he got around 1.5 million, and 20,000 more votes than leave did.

The type of voting system used wasn’t the only difference between the two votes. The number of registered voters for each election was slightly different. The Electoral Commission says around 5.7 million people were registered to vote in the mayoral elections, while the electorate in London for the referendum was about 5.4 million.

Some people were eligible to vote in the mayoral election but not the referendum. EU citizens resident in Greater London could vote in the mayoral (and General Assembly) election, but not in the EU referendum, unless they were from Malta, Cyprus (which are also Commonwealth countries) or Ireland.

The turnout for the mayoral election in London was much lower, at 46%, than the referendum, when it was 70%.