Do half the UK's exports go to Europe?

Half of everything we sell to the rest of the world goes to the EU.

The proportion of all goods and services exported going to the EU was 44% last year.

This would be an understatement if Stronger In were referring to the continent as a whole; about 55% of what the UK earned from exports of goods and services came from European countries in 2014.

But the campaign has confirmed that it's discussing trade with the European Union here.

The claim was correct a few years ago (with some caveats—see below), but it wasn't last year. The last time the proportion of exported goods and services heading to the EU crossed the 50% line was in 2008. Since then, it's fallen to 44.4%; not quite half, but close.

You can reach 50% by only looking at trade in goods. This would exclude over 40% of all of the UK's exports, and Stronger In told us that it does mean "everything"—trade in goods and services. 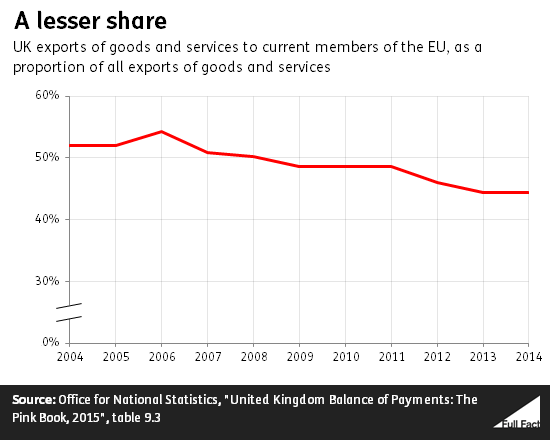 In absolute terms, the value of our exports to EU members has been falling off slightly. Last year, exports of goods and services were worth about £229 billion, down from £242 billion in 2010. 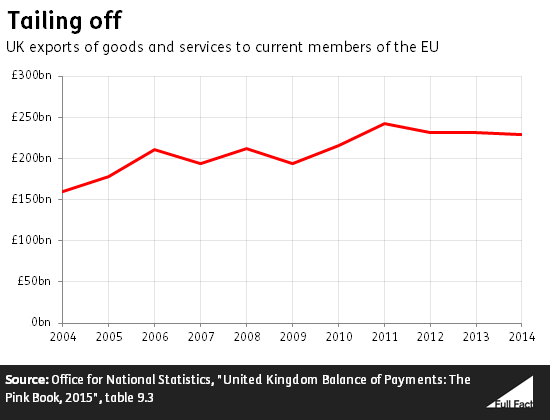 This is because of a fall in the value of goods sold; sales of services have held up.

Earlier this year the Office for National Statistics (ONS) published an article on the 'Rotterdam effect' (also known as the 'Rotterdam-Antwerp effect').

Goods exported to the EU don't necessarily stay in the EU. The Rotterdam-Antwerp effect is a suggested phenomenon where trade with the Netherlands and Belgium is exaggerated by British goods being shipped into the ports of Rotterdam and Antwerp and then dispatched elsewhere in the world.

As the ONS notes, this problem isn't unique to Rotterdam (or indeed Antwerp), but the sheer size of the ports in question focuses attention on them. It said that it's "reasonable to assume that trade with the Netherlands suffers from an element of distortion".

The ONS did publish estimates for trade in goods that attempted to adjust for this effect, while saying that these are highly uncertain. It thinks that EU countries accounted for between 46.1% and the recorded 50.4% of UK goods exports last year.

Both the ONS and the government's review of our EU membership concluded that it's hard to quantify the extent of the effect or establish whether it's a serious problem for the statistics.

It's worth noting that none of this discussion takes in the other half of our trade with the EU; imports also matter, and can significantly benefit British consumers and businesses.