Does the UK pay a fifth of the VAT going into the EU budget?

The UK pays nearly a fifth of all VAT going into the EU budget.

The UK is behind a significant share of the VAT revenue flowing into the EU budget. But it makes more sense to look at all contributions rather than a small part; VAT was only 12% of EU revenue in 2014.

The UK is behind a significant share of the VAT revenue flowing into the EU budget.

Business for Britain says that from 2007 to 2013, the UK accounted for almost 18% of this revenue. This is true in cash terms, and if we look over a longer period—from 2000 to 2014—then the story doesn't really change. 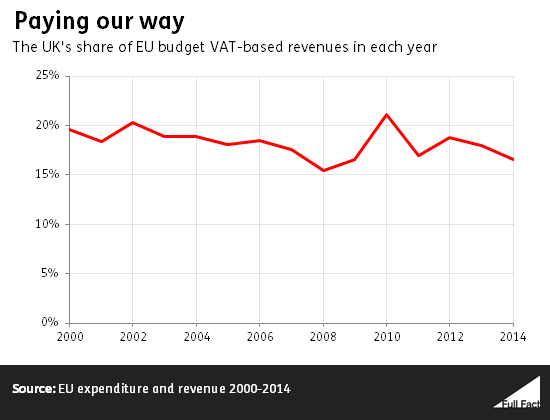 However, looking at the UK's contributions to just one part of the EU budget isn't that useful.

The VAT resource is one of a few ways that the EU raises funds for its budget. While it accounted for 38% of total EU revenue in 2000, it's become significantly less important over time and in 2014 accounted for just 12%.

The UK gets some money back from the EU in the form of a rebate payment. The EU accounts take this off total EU revenue. If instead we treated the rebate as part of the EU's spending, then VAT would account for a slightly smaller share of EU revenue. 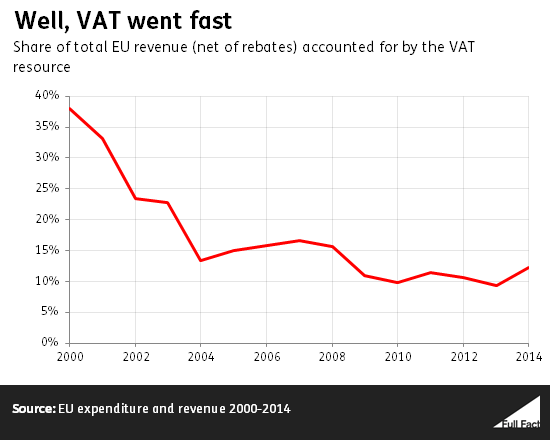 And, of course, the UK makes other payments to the EU as well. We could look at the share of total EU revenue the UK accounts for.

This still doesn't tell us whether or not the UK is getting a raw deal from the EU; we'd also want to look at what share of EU spending the UK received, and how other large high-income nations were treated.