The EU budget has its limits

EU budget spending commitments will be lower in 2016 than in 2015, and the 3% cut referred to by the Prime Minister was to spending limits over seven years, not spending in any particular year.

Last week EU institutions reached a deal on the EU's budget for 2016. It will make spending commitments worth €155 billion, provided the Council of the European Union and the EU Parliament formally adopt the proposal later this month.

This week the Guido Fawkes blog pointed out that this is a rise on last year's 2015 commitments (quoted as €145 billion), and shows that David Cameron's promise to have cut the EU budget by 3% hasn't been kept.

Neither is the case. The final budget for 2015, after it was amended, stood at closer to €162 billion in spending commitments, so next year's budget (so far) will be a fall on that. The 3% deal that Mr Cameron praised two years ago secured a cut in the EU's budget ceiling over seven years, not any specific annual budget like the agreement for 2016. That seven-year ceiling remains in place, albeit with some adjustments since it was first approved. 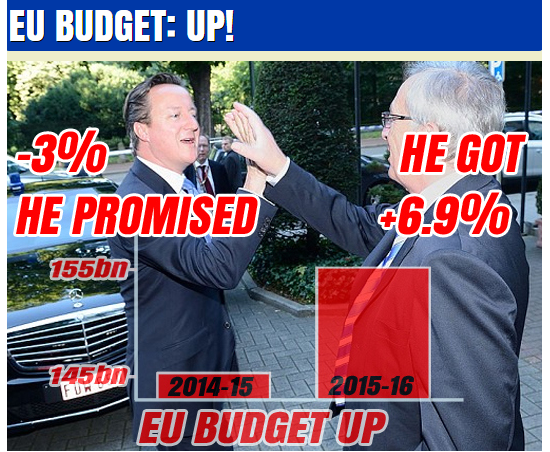 Seven-year ceilings, with some flexibility

That's what the Prime Minister hailed as a success after the UK government claimed to have taken a hard line in negotiations.

Those ceilings have been adjusted since then, in part because actual spending in 2014 was much less than expected (due to the lateness of the 2014-2020 agreement), so the 2015 spending had to be increased. That's why the initial budget figures for 2015, quoted by Guido, no longer represent what was spent in that year.

Not all spending in the EU budget falls within the ceilings. There are certain programmes, such as those to help deal with the refugee situation, which the EU can raise additional money through if it needs to.

The EU Commission confirmed to us that the 2016 Budget falls within the current spending ceiling.