The EU has reduced roaming charges

Roaming charges in Europe are lower because of the EU.

The EU has put a cap on the amount you can be charged for using your phone abroad, and prices have fallen. Networks won't generally be able to charge roaming fees at all from 2017.

"Europe makes us better off. Being in means... lower phone roaming charges when travelling.

Claims about the EU's role in cutting the cost of using a mobile phone abroad are frequent to the point of notoriety.

There's good reason for this: the maximum that networks can charge for calls, text and data in another EU country has been capped for years now, and at lower and lower levels.

By 2017, companies won't be able to routinely charge any extra for roaming.

Various EU regulations have placed limits on what providers can charge for making and receiving calls, sending text messages and using mobile data in the EU. 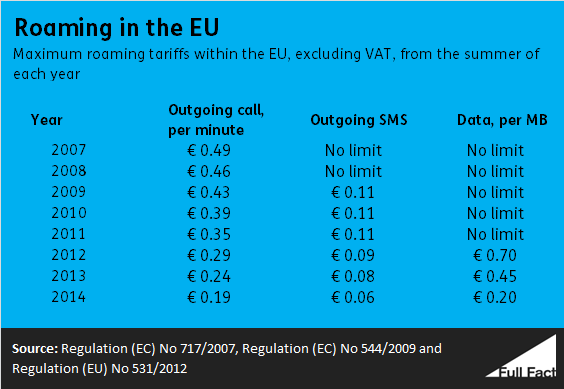 Data collected by national regulators and published by the Body of European Regulators for Electronic Communications (BEREC) shows the average retail price per minute for making roaming calls has fallen by 79% from before the introduction of the cap to last year.

The price for receiving calls abroad is down by 89%, the price of a text message by 79%, and data per megabyte by 95%.

Some of this may be down to factors other than the cap: the retail price for roaming data had been decreasing before the cap was introduced in 2012.

This is just the rate charged for roaming specifically, so it doesn't take into account any price rises in regular bills that providers may have introduced to make up for lost roaming income.

Roaming charges to be scrapped altogether within a couple of years

Anecdotal evidence indicates that some people still pay a lot to use their phones abroad under the capped regime. A law to scrap roaming charges altogether from June 2017 was passed in 2015.

When it comes fully into force, networks won't be able to charge a customer more for roaming within the EU than they charge at home. Between April 2016 and June 2017, they'll be able to add a top-up fee of no more than €0.05 on every call made or megabyte of data used, and €0.02 on every SMS sent (excluding VAT).

These fees will be abolished altogether from 15 June 2017.

Higher rates will be possible only under a 'fair use' exception to make sure the rules only apply to "periodic travel".

The EU says it would be "abusive" if people were able to sign up to a provider in a country where it's cheap, and make that their permanent mobile phone plan back in their home country.

But even the 'fair use' rates are set to be capped at the current maximum.

On the face of it that seems to mean that, for example, someone with a Spanish mobile phone contract could take their device to the UK permanently and be guaranteed to pay no more than the 2014 rates shown in our chart above.

The Commission is due to publish detailed 'fair use' rules by the end of the year, though, so it may not work like that.

We updated the article to include data on the average retail prices for roaming calls, texts and data published by the Body of European Regulators for Electronic Communications (BEREC). We also changed references to a draft law to scrap roaming charges, as it has since been passed.

We updated some figures and quoted a more recent claim from Britain Stronger in Europe.