The EU, homeopathy and Norwegian vets

The EU has ordered organic farmers to treat sick animals with homeopathy in a new directive.

EU legislation promotes homeopathy in organic farming if it's an effective treatment. The law isn't particularly new, as a revised version of the claim makes clear.

For better or worse, homeopathic remedies are certainly promoted in EU organic food standards. But they're not the only alternative to ordinary medicine, and organic farmers are allowed to call in the vet if 'natural' methods don't work.

The Telegraph originally reported of a "new EU directive which came into force in January", and quoted from it. We initially said that we couldn't find any evidence that this specific directive or quote existed.

That's still true of the quote, which no longer appears in the article online. This revised version also expands on the reference to January: although most EU legislation on this is old, as we explain below, one measure relating to organic certification for fish didn't apply here until this year. We didn't pick up on this in our original analysis.

The EU says that its laws in this area are about "consumer confidence in products labelled as organic".

The main EU regulation dealing with organic farming was made in 2007. It says that sick animals can be treated with ordinary medicine, including antibiotics, when the use of more natural remedies is "inappropriate".

More detailed rules from 2008 list products that should be preferred to medicine and antibiotics "provided that their therapeutic effect is effective". These include homeopathic products, but also various vitamins and compounds of mineral origin.

If they don't work, and treatment is needed to prevent the animal from suffering, a vet should be called in.

So the law is quite clear: these approaches should be used in organic farming so long as they work. Animals that receive more than a certain amount of ordinary medicine can't then be called 'organic', though.

The Telegraph has previously reported the government's Chief Scientific Advisor as saying that "homoeopathy is nonsense".

Reacting to the law, not the story

The rules are reflected in the responses of those quoted in the Telegraph's article. The Department for Food and Rural Affairs (Defra) said, correctly, that farmers "could resort to other means, such as antibiotics, without losing their 'organic' status if homeopathic remedies proved to be ineffective".

A spokesperson for the Norwegian Veterinary Association is quoted as saying that "If you start using homeopathy, you prolong the time when the animals are not getting adequate treatment and that's a threat to animal welfare".

That's perfectly consistent with a situation where homeopathy is among the remedies encouraged, with medical treatment as a fall-back when the animal remains sick.

The evolution of a myth

Hold on. If this has been the case for years, why is it a story now, and why are there Norwegians involved?

Let's look at the timeline. The Telegraph story was published on the evening of 24 April. On the 23rd, the Daily Mail had published a story on the organic rules as they relate to fish (as opposed to livestock), which date from 2009. 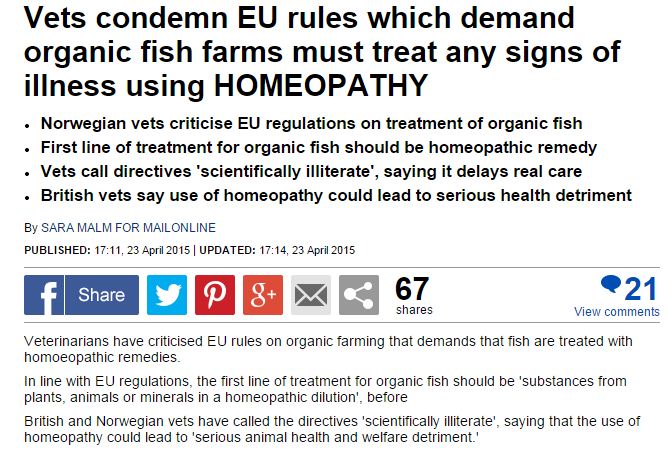 The Daily Mail, in turn, cites a Norwegian English-language website, The Local, which ran its story earlier the same day. It makes clear that the issue has come up because Norway, which has to take on board a lot of EU laws despite not being a member, is only now getting around to implementing the rules on organic fish. Its vets aren't happy about the homeopathy element.

The Local references the Norwegian newspaper Dagbladet, which in its report on 22 April links through to those 2009 rules on organic aquaculture. Dagbladet confirms that they "are not new" (as per Google Translate).

The Telegraph was specific in its reporting, though. It mentioned a "directive" coming into force in January, and included an extract from it.

There's no indication in the EU law database that any significant changes to the law went through recently. The EU Official Journal list of new laws in January is heavy on imported fruit and vegetables, but light on new organic regulation.

The organic umbrella group IFOAM EU has a list of EU laws on organic farming on its website, going into 2015. None of them correspond to what the Telegraph first reported, so we originally said this seemed like an error on their part.

The Telegraph has since pointed out that the 2009 rules on aquaculture came with a transitional period, to July 2013. They were then extended to 1 January 2015. This is made clear in the revised article, which also describes "rules from Brussels" rather than "new rules from Brussels". The newspaper says that Defra provided the wrong information on when the law was changed.

The Telegraph quoted from the "new directive" as follows: "it is a general requirement for production of all organic livestock that (herbal) and homeopathic products shall be used in preference to chemically-synthesised allopathic veterinary treatment or antibiotics."

The underlined part comes from the 2008 rules: "Phytotherapeutic, homoepathic products, trace elements and [vitamins and minerals] shall be used in preference to chemically-synthesized allopathic veterinary treatment or antibiotics, provided that their therapeutic effect is effective for the species of animal, and the condition for which the treatment is intended."

We can't locate any document that contains the first half of the quotation, which has since been removed from the article. The Telegraph explained that it came from Defra, and could reflect an earlier draft of the legislation.

As the Telegraph doesn't run a corrections column or tag online articles when they're revised, we don't know when these changes were made.