The UK could not bring in safer lorry designs until the EU legislated on the matter.

The EU sets rules on permitted lorry dimensions, which we have to follow. But the EU voted to allow safer lorry designs in 2014, a plan which the UK government initially opposed.

“Indeed we seem to have gone backwards since the last Chequers meeting in February, when I described my frustrations, as Mayor of London, in trying to protect cyclists from juggernauts. We had wanted to lower the cabin windows to improve visibility; and even though such designs were already on the market, and even though there had been a horriﬁc spate of deaths, mainly of female cyclists, we were told that we had to wait for the EU to legislate on the matter… If a country cannot pass a law to save the lives of female cyclists - when that proposal is supported at every level of UK government - then I don't see how that country can truly be called independent.” 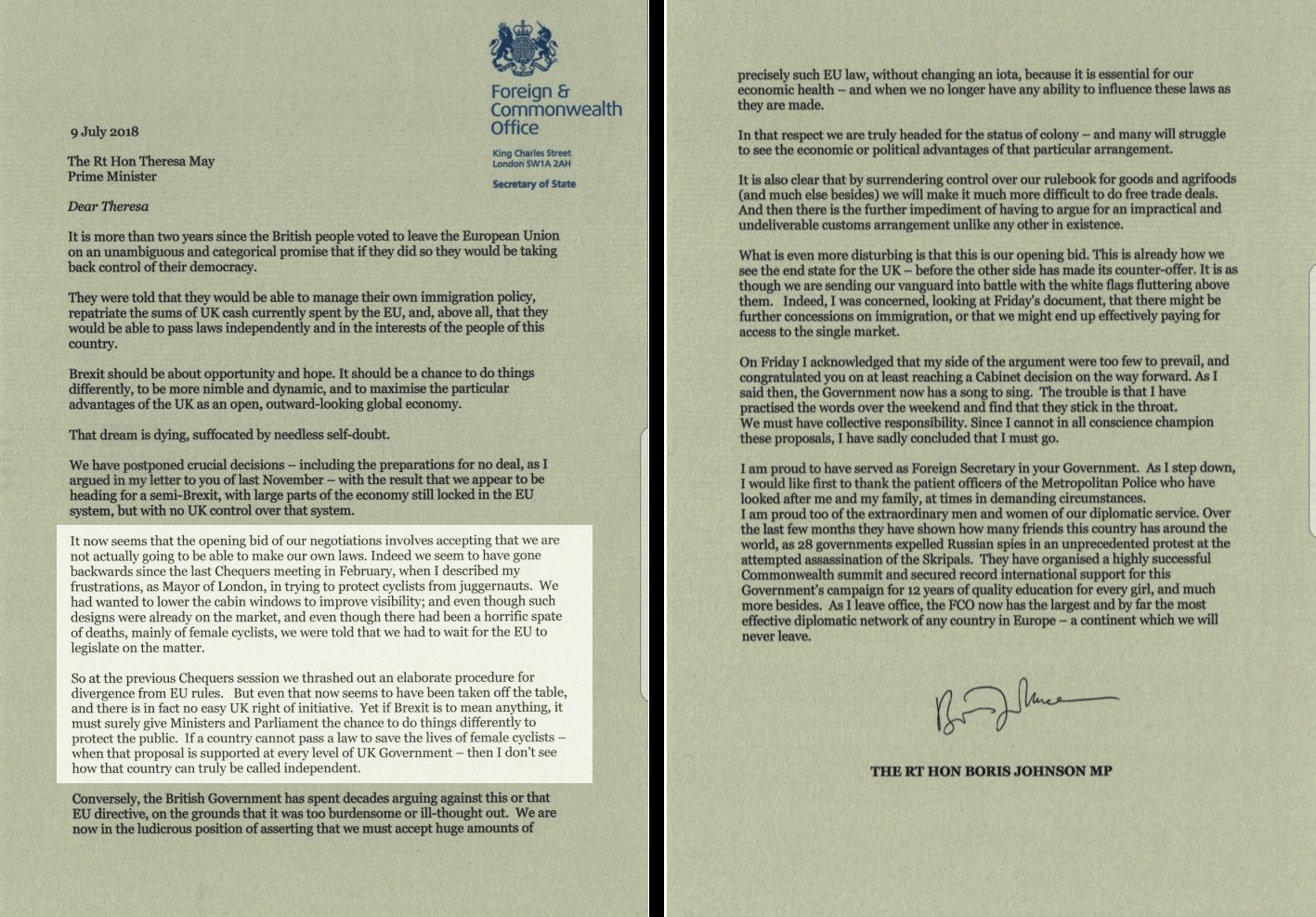 Mr Johnson has made a variation of this claim—most recently made in his letter resigning as Foreign Secretary—several times in the past. It's correct that laws on lorry design standards are set at EU level.

However, the EU did vote to amend its law on the matter in 2014, widening lorry design specifications to increase driver visibility and reduce the chance of serious injury in a low-speed collision. In the months prior to that vote, Mr Johnson criticised the British government for being opposed to the EU’s reforms (it eventually voted in favour, as did all EU member states).

The new design is optional, not mandatory, and new-design lorries won’t be allowed on the road until 2019 or 2020.

The EU legislated on lorry design in 2015

EU rules on the maximum dimensions of lorries were set out in a directive from 1996. As an EU member, the UK has to follow this directive. It is the reason why today’s lorries are “brick-shaped”, according to the European Commission.

In 2014, the European Parliament voted to support an amendment to the directive, which allows lorries to exceed the legal dimensions if it makes them greener and safer. This change was first proposed in April 2013, the same year that Mr Johnson says he first wanted a change of law.

These rules became a new law, or “directive” in 2015. The new rules allow manufacturers to produce lorry cabs that have a more rounded shape, which improves visibility for the driver and reduces the risk of serious injury in the event of a low-speed collision. The directive also aims to improve the environmental performance of lorries. These rules are not mandatory—older lorry designs will still be allowed on the road.

The European Commission told us that the new-design trucks will appear on European roads as of 2020, and that the Commission has proposed to bring that date forward to 2019.

It was widely reported in 2014 and 2015 that the delay in the trucks being allowed on the road was as a result of a compromise agreement with the French and Swedish governments. France and Sweden were pushing for the implementation of the law to be delayed by ten years, in order to protect their domestic lorry manufacturers.

The UK government reportedly opposed these reforms to begin with

When the amendments were being debated in January 2014, Mr Johnson was quoted as saying they could “save literally hundreds of lives across the EU in years to come”.

This runs counter to Mr Johnson’s suggestion that that a proposal to change the law on lorry design was “supported at every level of UK government” while they “had to wait for the EU to legislate”. It appears that the government initially opposed the EU’s attempt to legislate on the issue, only to later vote in favour of it.

We updated the article with new information we received from the European Commission on when the new-design trucks will be allowed on the road.