Does most of the EU have no steel industry?

The overwhelming majority of other EU countries have no steel industry to protect.

Incorrect. Seven EU countries produce more steel than the UK, including large economies like Germany, Italy, and France. The UK is responsible for 4% of the EU’s crude steel production.

If the UK were in a customs union with the EU, we’ll be reliant on the European Union to protect our steel industry.

Being in a customs union with the EU means we have to apply the same tariffs on steel imports as the rest of the EU does.

“If (Labour MPs) want to protect UK industries such as the steel industry from unfair dumping at below market prices, they should bear in mind that if we’re in a customs union they’ll be reliant on the European Union to protect our industry. And the overwhelming majority of the remaining EU27 probably quite like buying Chinese steel or whatever below world prices because they have no steel industry to protect.”

Andrew Bridgen—a Conservative Party MP and Brexit supporter—claims that the “overwhelming majority” of EU member states have no steel industry. 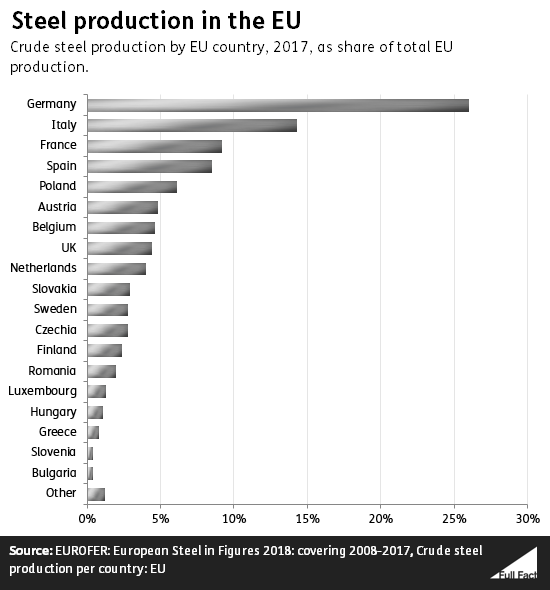 The EU is already taking action against steel dumping

Mr Bridgen seems to be implying that the UK steel industry could be undermined by being in a customs union with the EU, as the EU might allow the ‘dumping’ of Chinese steel into Europe—where it is sold for below its market price.

The EU is at least somewhat concerned about steel dumping already, as recent actions show.

For example, last October, the EU extended anti-dumping measures against certain steel products from Russia and Ukraine for five years. Under these measures, certain products from these two countries carry import tariffs of between 12% and 36%.

In February 2019, the EU put into place a “definitive safeguard” on steel imports. The safeguard covers 26 steel product categories, and applies quotas on how much of these products can be imported to the EU tariff-free. Once the quota has been surpassed, an import tariff of 25% is applied.

If the UK wasn’t in a customs union it could, if it wanted to, set higher tariffs on steel imports than those set by the EU (as for instance, the USA has done). But it’s not clear that the UK would choose to do so. The UK has backed previous duties imposed on steel imports by the EU, but also objected to some proposals to raise duties. The UK government was also critical of the decision to raise steel import tariffs in the US last year.