"We have halved the bill, delayed the bill, will pay no interest on the bill"—George Osborne

The Chancellor was today called to Parliament to answer questions regarding his talks with EU finance ministers on the UK's additional EU bill.

When the £1.7 billion surcharge initially came to light it took many by surprise and questions were raised over how it had been calculated. The argument moved on to the actual size of the bill and now to whether the Chancellor had (or ought to have) known about it.

Mr Osborne returned from the meeting in Brussels last week claiming to have halved the demand to £850 million. But his European counterparts say that the reduction was always going to happen once a rebate due to the UK was factored in.

Britain receives a substantial rebate on its EU payments to reflect the fact that relatively little money flows back from the EU. Normally the rebate would be issued a year after the main payment was made but now it will be given at the same time as the bill is settled.

Mr Osborne today told the Commons that the rebate was only confirmed on 6 November, and was "extra to any other rebate that might apply".

But the EU budget commission had given a statement before then saying that Britain's rebate was going to apply. The statement from Jacek Dominik, the commissioner for financial programming  on October 27th said: "The UK will benefit from the UK rebate for the additional payments in 2014.".

Mr Osborne has certainly won some concessions: the bill will be repaid over a longer schedule and without interest payments. This will significantly reduce the real value of the payments made. Similarly, by removing the sum to be rebated from the payment, the UK effectively avoids giving the EU an interest free loan.

Although the EU's intent to apply the rebate appears clear in retrospect, and it is hard to see that the bill has been 'halved' since the October 27th statement, it is unclear what was decided on the 6th of November and there may have been something that affected the final figure.

So what exactly is the change in the rebate? Well, it looks something like this: 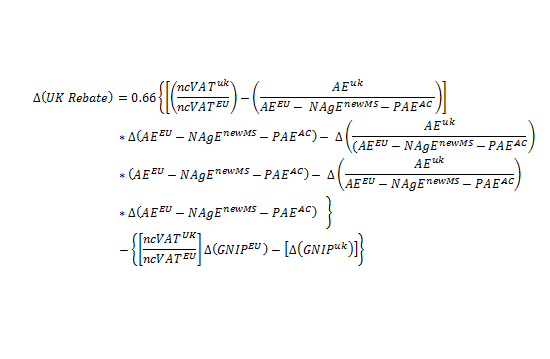 Pretty straightforward, I'm sure we can agree.