Has public opinion swung in favour of a second EU referendum?

Public opinion is swinging in favour of having a second referendum on Brexit.

There is some polling evidence of a shift in public opinion towards another referendum, but different polls have given inconsistent results, and results can vary a lot depending on what question is asked.

Sir John Curtice has said there is absolutely no evidence of a swing in favour of a second referendum.

Not quite right - Professor Curtice has said that there is some evidence of a swing, but that the evidence is not consistent.

“Public opinion is clearly swinging in favour of having a people's vote.” Vince Cable, September 20 2018

“There isn’t any evidence for that… Sir John Curtice, who’s like Britain’s leading pollster,  today said there is absolutely no evidence of a swing in favour of a second referendum.” Camilla Tominey, September 20 2018

There is some evidence that public opinion has swung towards a referendum on the final Brexit deal, although there is significant disagreement between polls. It’s not right to claim that Sir John Curtice has said there’s "absolutely no evidence" for it - he has said the evidence is not "consistent".

This means it is still not entirely clear what the trend is, and whether a majority of the public back a second vote. As Professor Curtice has said, the uncertainty comes from the fact that polling responses can differ significantly depending on exactly what question is asked, and what the options for a hypothetical referendum would be.

What John Curtice has said

Professor Sir John Curtice is a political scientist at Strathclyde University and the National Centre for Social Research, and is widely regarded as one of the UK’s leading authorities on polling (and who has become well-known thanks to his regular appearances on the BBC).

"There is no consistent evidence of a shift in support for a second referendum" Prof John Curtice told #factcheckjoel after #politicslive guests made claims about calls for a further votehttps://t.co/iR09IQOEQt #politicslive pic.twitter.com/8DJfXbcbBY

He has also repeatedly written in the past month that there is some evidence for such a swing. However, he has cautioned that different polls give very different results, and that it is unclear whether a majority of the public currently support it - hence his comment that the evidence isn't consistent.

On August 28, he wrote for the What UK Thinks: EU site that “while there is some evidence that Chequers may have persuaded a few more voters of the merits of holding another ballot, we probably need more instances of the same question showing an increase in support since before the beginning of July before we can be sure that this is indeed what has happened.”

Some weeks later on September 18, he wrote for the BBC: “This idea [a referendum on the final deal] has gradually become more popular - even more so in the wake of the Chequers agreement. But there may still not be a majority in favour.”

And the following day he tweeted that some polls show a shift towards a second vote, but others do not:

Why is the picture unclear?

Public opinion over whether a second vote should be held the final deal agreed for exiting the EU is complicated by two main factors. One is how the opinion poll phrases the question, and the other is what options the hypothetical referendum would present to the voters.

As Professor Curtice wrote in his August 28 post, people’s responses seem to differ depending on whether they are asked about a “second referendum”, or whether they are asked if “the public” should have a vote on the “deal”. And because different polling companies have asked different questions at different times, it is hard to say with certainty how public opinion has shifted.

So has public opinion shifted?

One polling company, YouGov, has consistently asked the same question at regular intervals over the past year, which gives us the best opportunity to see if there is a long-term trend.

Their question is “Once the Brexit negotiations are complete and the terms of Britain's exit from the EU have been agreed, do you think there should or should not be a referendum to accept or reject them?”. The polling since April 2017 suggests that there has been a shift in favour of a second referendum - from a clear majority against a second vote a year ago, to a roughly even split in recent polls. 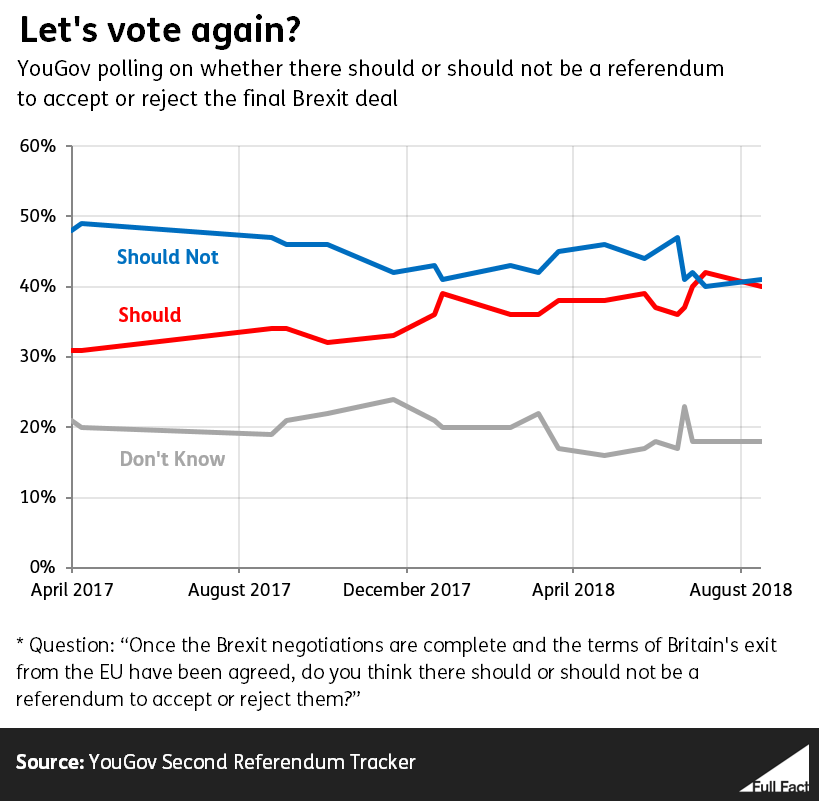 This has to be interpreted in light of the caveats mentioned above: the phrasing of the YouGov question has generally prompted responses more opposed to a second referendum than other polling, and it still doesn’t show a clear majority in favour.

Conversely, some polls that have generally shown a majority in favour of a public vote on the deal have shown a slight move in the other direction, although they still show clear majorities supporting a referendum.

The only other regular poll we’re aware of that consistently showed a majority opposed to a second referendum, from Opinium, has not polled on that question since the Chequers meeting that agreed the government’s negotiating position.

On the balance of the evidence, it does seem more likely than not that there has been some shift of public opinion in favour of a referendum on the final deal - but it is not consistent across different polls, depends heavily on how the question is phrased, and it’s hard to say how large the shift (if any) has been.