How many free trade deals has the EU done?

The UK takes part in free trade agreements with 50 countries because of our EU membership.

The EU lists 50 countries with which it currently has a trade agreement of one kind or another.

"Thanks to our membership of the European Union, we benefit from free trade agreements with 50 countries around the world"

The most comprehensive list of EU free trade agreements seems to be in a European Commission memo from December 2013.

Other deals are part of a more wide-ranging treaty, or an agreement with poorer countries aimed at economic development as well as trade.

The list also includes the European Economic Area countries (Iceland, Liechtenstein and Norway) that take part in the EU single market, as well as Switzerland, which has close ties to it. The text of individual agreements can be found here. 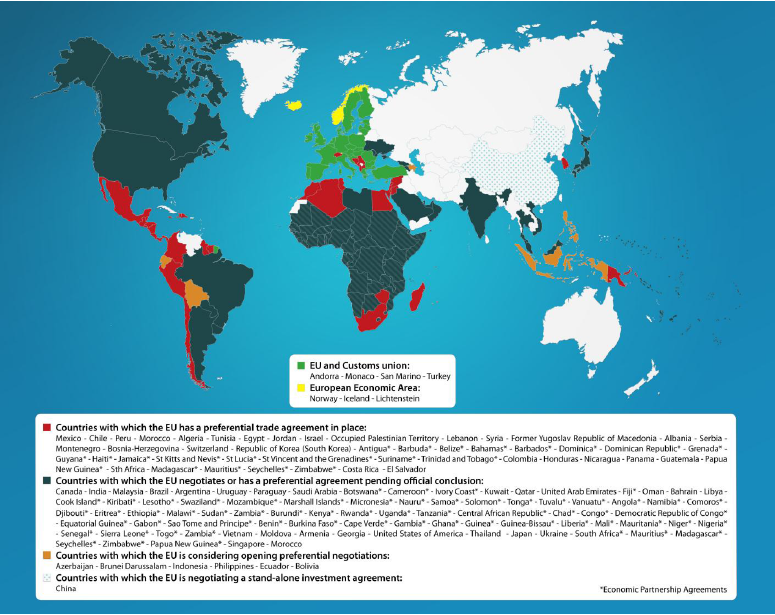 Other agreements are in the pipeline, most notably the Transatlantic Trade and Investment Partnership with the USA.

The European Commission says that if a member country like the UK were to leave the EU, it would no longer benefit from these treaties.

The question then becomes what kind of deal we could get negotiating alone.

As the last government's review of our EU membership noted, "assessing the impact of alternatives to EU membership on the UK's trade and investment relationship with third countries is not straightforward or simple".

We'll do our best to lay out the issues as the EU referendum campaign develops. In the meantime, beware simple answers.