Brits abroad: how many people from the UK live in other EU countries?

There are two alternative estimates, and neither is perfect

Recent figures on Brits abroad have been compiled by both the UN and the ONS. Both are based mainly on census data gathered from EU countries in 2010 and 2011. The difference between them lies in what’s been done to those numbers.

The ONS looks at both UK-born people and UK citizens. It brings together mainly census figures from across the EU from 2010 and 2011. The figures just cover people who live abroad for at least a year, rather than just short-term emigrants.

The UN looks just at UK-born people. It takes the census figures as a starting point and then ‘ages’ the figures a few years up to 2017, estimating how many people have immigrated to and emigrated from those countries during that period.

The UN data isn’t a perfect measure, as different countries define “immigrant” differently. Some define their migrant population as those born abroad; others count foreign citizens. As the House of Commons Library comments, this is an “unavoidable limitation” of using these figures to compare countries.

In the context of the Brexit debate, the figures on citizenship are arguably more relevant. That’s because free movement rules are based on which country you’re a citizen of, rather than where you’re born. 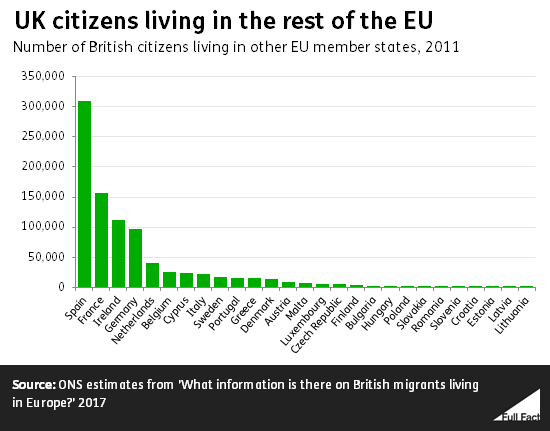 Where UK-born people lived in 2017 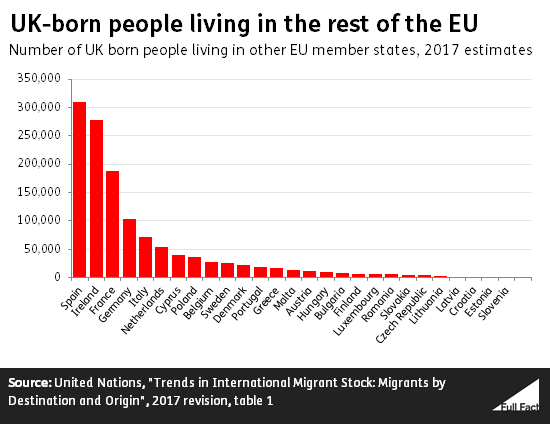 Those 1.3 million people place the UK fifth among EU countries for the size of their expat population in other EU member countries.

Poland has the most: an estimated 3.7 million Poles live elsewhere in the EU. Romania, Germany and Italy also have higher expat populations than the UK. 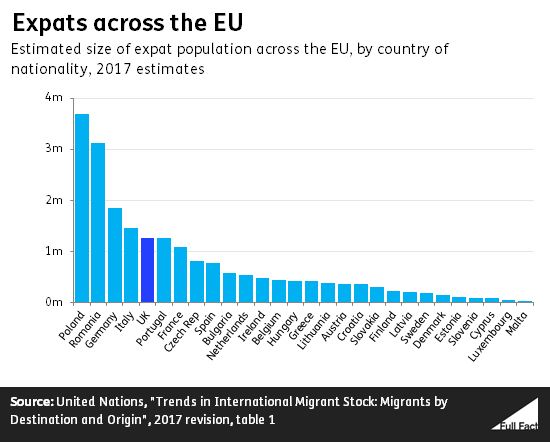 The University of Oxford’s Migration Observatory produced similar research in 2011, which has since been updated.

Previous estimates have placed the figure higher, but these aren’t the best or most recently available figures

An older estimate by the IPPR think tank estimated that 1.8 million UK nationals lived in other EU countries for at least a year in 2008. This rose to 2.2 million when including people who lived abroad for at least part of the year.

This was produced before all the census data used by the UN was available, so the researchers filled in the gaps using various assumptions.

This estimate was used by the government, but the IPPR itself no longer uses it. It has more recently used the UN figures.