Per head, Norway pays almost the same amount into the EU budget as the UK.

Norway’s payments linked to its relationship with the EU are around two thirds of what the UK pays per head of population, before money comes back. Comparing payments after money comes back is difficult, but seems to narrow the gap still further.

How much does Norway, which sits outside the European Union, pay for its relationship with the bloc as a member of the European Economic Area? And is it a guide to what the UK might have to stump up if we wanted the same deal?

If the UK joined the EEA after it leaves the EU:

Norway pays into the EU programmes it is involved in, and gives out grants

Norway’s main payments are direct grants to poorer European countries, and participation fees for specific EU initiatives. Along with some other running costs, this will add up to around 890 million euros per year up until 2020, or £740 million at current exchange rates.

That figure doesn’t include what Norway gets back. 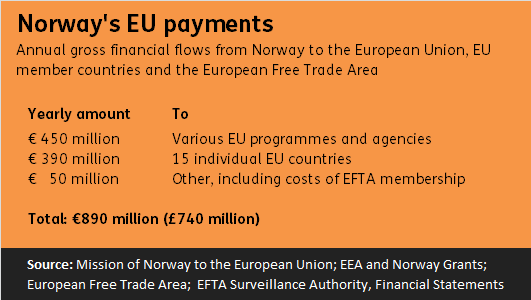 The UK pays more per head for full membership

Unlike Norway, the UK contributes directly to the central EU budget. The size of its contribution is based on the size of its economy and its VAT income.

So the UK government was due to pay in about £9,500 million each year on balance for its EU membership—its ‘net contribution’.

The Norwegian government doesn’t regularly publish figures for its net contribution to the EU. It says that:

“It is not possible to compare net payments between those of an EU Member State and those of a Non-Member state”.

The House of Commons Library has estimated that, assuming that Norway didn’t get a lot back, imitating its relationship with the EU would make the UK’s contribution to the EU per head about 25% smaller.

A more recent estimate from the think tank Open Europe says that the saving per head would be more like 12%.

The difference is largely down to taking into account research funding from the EU, which both British and Norwegian researchers get a lot of.

Norway’s payments and what they might mean for the UK

Norway pays around €400 million a year in grants paid to some of the EU’s poorer countries.

While not formally a single market membership fee, this money is linked to trade relations with the EU.

Norway’s EU minister said last year that “We gain from being a member of the single market. That is correct and that is also why we are definitely prepared to contribute”.

Switzerland has a series of treaties with the EU to be in parts of the single market, and also makes grant payments.

So the UK might be asked to pay similar grants if it wanted to be in the single market.

The other major cost to Norway of its relationship with the EU is for joining in particular bits of its work. For example, it pays its share to be part of the EU-run Erasmus student exchange programme.

The bill for Norway and other EEA countries joining in these EU programmes is calculated based on the size of their economies.

This suggests that if the UK took part in the same programmes, it could cost several billion a year.

Most UK economists think that leaving the EU will be bad for the economy, but remaining part of the single market as an EEA member will be the least damaging option.

The membership fee, either to be an EU member or an EEA member, affects the public finances much less than changes to the wider economy.

But EEA membership might be seen as being in the letter rather than the spirit of the referendum vote. Among other things, it generally requires accepting free movement of people. The new government is reportedly against it.

We changed the conclusion at the top of the article as it did not reflect the main text.

We updated the article in light of a new estimate from Open Europe, and updated some of our own figures.