German TV said there were 2.2 million people at the People’s Vote march on Saturday 19 October.

We’ve seen no evidence any German TV station said this. All the reporting we’ve seen from German TV and other news media outlets put the number in the tens or hundreds of thousands.

Sky News said there were 2 million people at the People’s Vote march on Saturday 19 October.

We’ve seen no evidence it said this. It reported the figure as “hundreds of thousands”.

After the People’s Vote march on Saturday 19 October, tweets claiming that there were either two million or 2.2 million people on the march went viral.

The viral claims say that the figure of two million was reported by Sky News, and that the figure of 2.2 million came from “German TV”. The three most widely shared tweets reporting one or both of these numbers—including one from Alastair Campbell, and another from TechCrunch editor-at-large Mike Butcher—have over 8,000 retweets between them.

There is no evidence of either Sky News or German TV reporting these figures. Crowd scientists at Manchester Metropolitan University have told us that 2 million is an implausible estimate.

The first reference we’ve seen linking the numbers to Sky and German TV came from a tweet posted by an anonymous account at 3.54pm on the day of the march, which referred to those figures being from the “last march”. The same tweet was also identified by Professor Tanja Bueltmann of Northumbria University, who wrote about her attempts to find a source for the figures. Since then, hundreds of other tweets have repeated the same claims.

None of the tweets we have seen gave a source for the claims—even, as Professor Bueltmann points out, after being asked to do so.

The “German TV” station supposedly behind the claim is not identified in any of the tweets we’ve seen. However, of the major German television news stations or programmes, Tagesschau reported the march as having “hundreds of thousands” of participants, as did n-tv. Deutsche Welle opted for “tens of thousands”, as did ZDF, while Welt simply opted for “thousands”. None of them mention any higher estimate from a rival.

Sky News also reported the figure as “hundreds of thousands”. We asked Sky News if it reported a figure of two million. They told us that they had not produced their own official estimate of the crowd size, although it’s possible that their coverage may have reported on a claim that the crowd size was that large. We haven’t been able to find any reference to the figure in Sky’s online coverage.

Expert evidence suggests a crowd in the hundreds of thousands

We spoke to crowd science experts at Manchester Metropolitan University (MMU). Their calculations show it is implausible that 2 million people could have attended the march.

They used two separate methods which both produced estimates in the low hundreds of thousands at most. They said a more precise estimate would require more time and analysis. 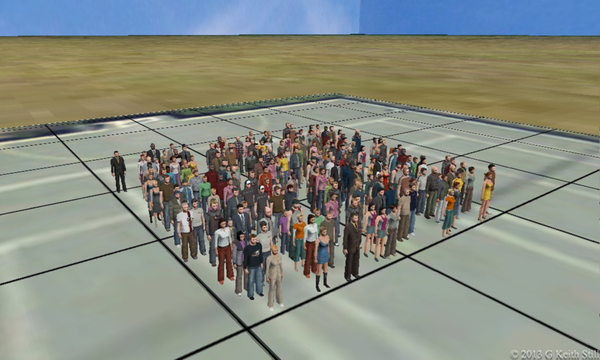 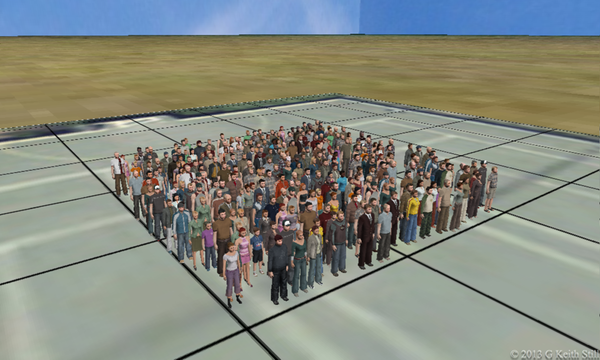 Given that the total area occupied by the crowd was observed at around 70,000 square metres, that means a crowd of between 105,000 and 210,000 people could have fitted along the total area of the route at any given time (though some more may have been in side streets and nearby areas).

This doesn’t cover the assembly area on Park Lane (which, aerial footage shows, was fairly empty at the height of the march). Even if you included it, the total march area would be roughly double, giving a capacity of around 200-400,000 people based on the observed crowd density—still well below 2 million.

Another way MMU estimated the total crowd size was to work out how many people could have passed through the official march route, over the course of its duration. This method acknowledges that crowds are fluid with people arriving and departing at different times

To do this you need to look at flow through the narrowest point of a march, which MMU measured to be 20 metres wide.

They told us that you could expect around 1,000-1,200 people to pass through that point every minute (based on a crowd density of four people per square metre—the safe limit in most situations).

Given that the march lasted 180 minutes, that gives a theoretical maximum capacity of 216,000 people walking along the march route over its total duration (1,200 people multiplied by 180 minutes).

Again, this doesn’t factor in people who might not have walked the official route, and the fact that the event did not come to a sudden halt after three hours exactly. But the march would have had to carry on for over 30 hours to fit a crowd of two million people along the official route.

Based on the weight of evidence, the crowd at Saturday’s march was likely in the low-to-mid hundreds of thousands and certainly not in the millions.

This piece was updated to include estimates and comment from crowd scientists at Manchester Metropolitan University.