Is it possible to repeatedly sign a parliamentary petition using the same email address?

You can sign the Revoke Article 50 petition repeatedly using the same email address.

It’s possible to use the same email address twice but no more than that.

You can sign the Revoke Article 50 petition using any name you want.

It is possible to sign using a false name.

“Oh, this is going to be a fun afternoon. You can sign any name you want to the Revoke Article 50 petition and use the same email address repeatedly. Let the games begin!”

A petition to “Revoke Article 50 and remain in the EU” published last week has garnered over 5.5 million signatures at the time of writing and generated a lot of debate about the process of signing petitions on the parliament website.

Oh, this is going to be a fun afternoon. You can sign any name you want to the Revoke Article 50 petition and use the same email address repeatedly. Let the games begin! #RemoanerMcRemoanface pic.twitter.com/WMWKExiBUy

A House of Commons spokesperson told us it’s possible to sign a petition up to two times from the same email address, but no more than that.

The petition supports remaining in the EU

The petition says: “The government repeatedly claims exiting the EU is 'the will of the people'. We need to put a stop to this claim by proving the strength of public support now, for remaining in the EU. A People's Vote may not happen - so vote now.”

In order to sign the petition you have to tick a box to confirm you’re a UK citizen, enter your name, email address, the country you’re in and your postcode. A verification email is then sent to you (these emails were being delayed last week due to the high volume of traffic). 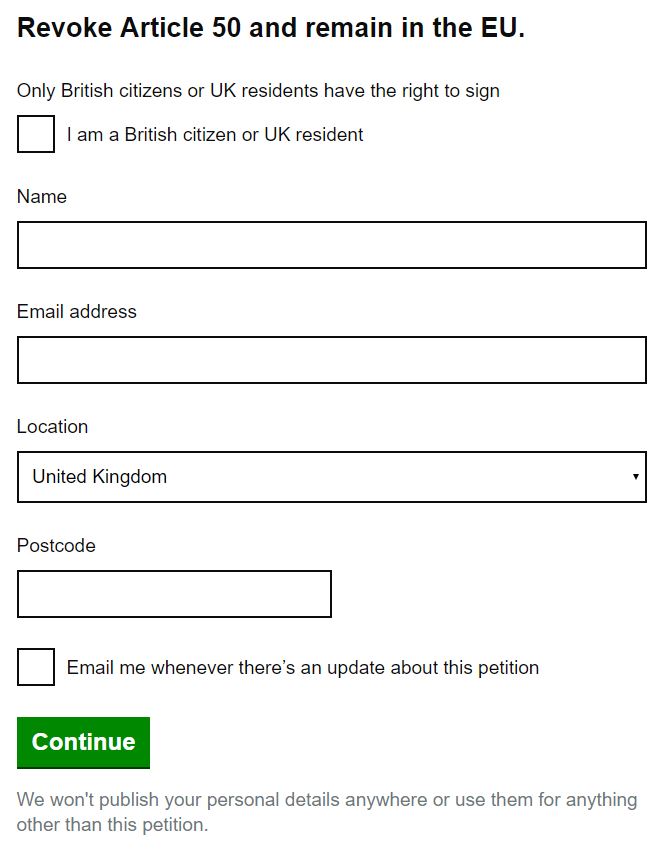 A House of Commons spokesperson told us “Many people share an email account with a partner or do not have access to email. To ensure that the petitions system is as accessible as possible, up to two people can sign from the same email address. An email address can only be used twice.

“The Government Digital Service have a number of ways of identifying and preventing fraudulent activity based around blocking, removing and monitoring signatures as appropriate.

“Some types of fraud are monitored to ensure that it does not affect the integrity of the petition. Evidence of fraud may affect whether the Petitions Committee choose to act on the petition.

“We do not comment in detail on fraud. Ideally someone who has tried to fraudulently sign the petition would never realise that they have failed.”

We verified this by testing the petition system, attempting to sign a petition three times from the same email account using different false names each time. On the first two occasions we were told our signature had been added to the petition, but on the third time the system told us we couldn’t sign again as we’d used that email address before.

We subsequently asked the Petitions Committee to remove our test signatures, which it has now done.

The Petitions Committee also added on Twitter: “We don’t comment in detail about security measures. We use different techniques—automated and manual—to identify and block signatures from bots, disposable email addresses and other sources that show signs of fraudulent activity. We also monitor signing patterns.”

We updated this piece to include the fact that the Petitions Committee removed our test signatures after we contacted them to request this.