Being in Europe means lower prices in UK shops, saving the average UK household over £350 a year. If we left Europe, your weekly shop could cost more. 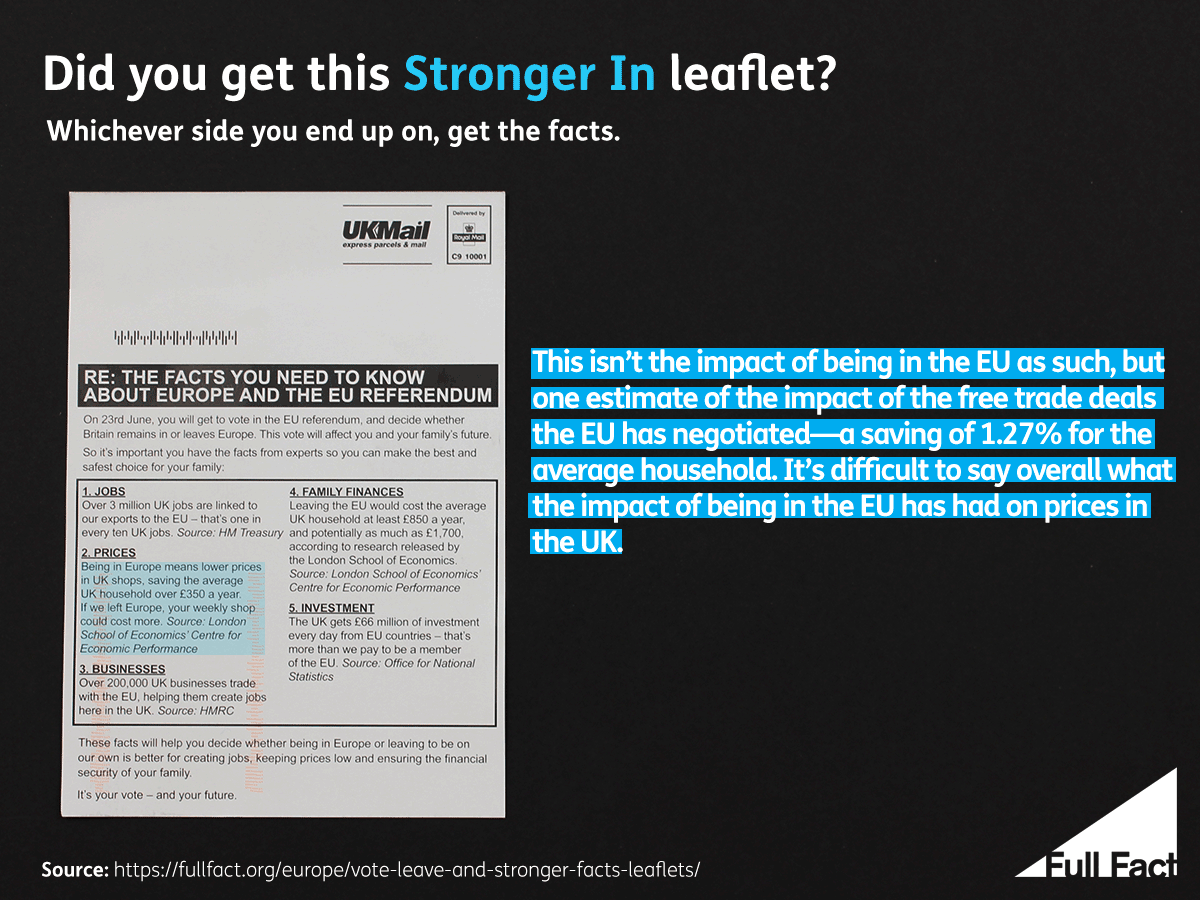 “Being in Europe means lower prices in UK shops, saving the average UK household over £350 a year. If we left Europe, your weekly shop could cost more”.

We’re not aware of any study that tries to quantify all of the EU factors that might push prices up or down, and realistically that would be extremely difficult to do as we can’t know what would have happened had the UK not been in the EU.

The research this figure is based on found that free trade agreements negotiated by the EU had led to lower prices for imported goods that UK consumers buy. The researchers say that’s because free trade agreements remove or reduce import taxes called tariffs on goods from outside the EU, which increases the flow of those goods into the EU market, which increases competition and in turn leads to better quality products and lower prices.

This isn’t the impact of being in the EU as such, but the free trade deals it has negotiated. Leave campaigners argue that the UK could strike its own trade deals, better and more quickly, outside the EU.

The researchers estimated that UK consumers save about £9.5 billion every year on the imported goods they buy due to the free trade agreements negotiated with non-EU countries between 1993 and 2013, and the addition of 12 countries to the EU in 2004 and 2007. That works out at £350 for every household—although this doesn’t really mean much as the real figure will depend on the goods you tend to buy.

What this means is that, if these free trade agreements didn’t exist, the prices of imported goods could be £9.5 billion higher because of the tariffs placed on goods imported from countries outside the EU.

The researchers argued that these estimates should be taken as the lower end of what the impact might be.

It’s the fact that these tariffs exist in the first place that has led Vote Leave to say that being in the EU increases the costs of consumer goods. That assumes that we would lower tariffs even further if we left the EU. We’ve got more on this here.

There is much more to the impact on prices of this decision than free trade agreements. It’s widely expected, including by the Governor of the Bank of England, that the short term impact of leaving the EU would include a fall in the pound. Some components of spending, notably fuel, fluctuate with the exchange rates, and this could see prices rising in the short term. The longer term is of course more uncertain.