The Telegraph’s poll figures on suspending parliament are misleading

Boris Johnson has the support of more than half of the public to deliver Brexit by any means, including suspending Parliament, according to a poll.

Incorrect. The poll showed that 44%, not a majority, agreed with the statement. There are also other problems with the poll.

Since we originally wrote this the Telegraph has corrected their article.

“Boris Johnson has the support of more than half of the public to deliver Brexit by any means, including suspending Parliament, according to a poll.” 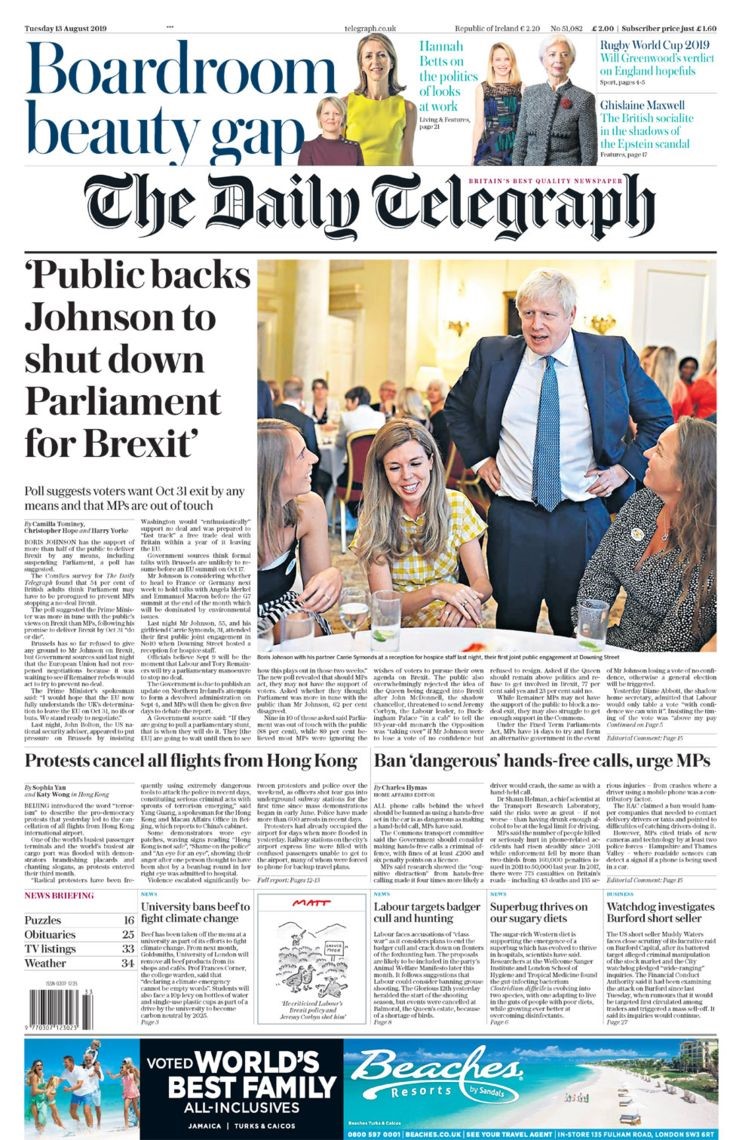 The Telegraph recently commissioned pollster ComRes to survey a representative sample of adults in Great Britain on Brexit.

The Telegraph presented the results in their front-page splash, claiming that more than half the public support Boris Johnson delivering Brexit by any means possible, including suspending Parliament. This was repeated by various media organisations including Metro and Reuters.

This claim is incorrect.

The exact question was:

“Do you agree or disagree with the following statements?

“Boris needs to deliver Brexit by any means, including suspending parliament if necessary, in order to prevent MPs from stopping it.”

44% does not, as the Telegraph claims, represent more than half of the public.

The Telegraph excluded all the people who said they didn’t know from its reported findings in order to claim that a majority of the public (54%) agreed. This isn’t appropriate.

Since we originally wrote this, we got in touch with the Telegraph, who have now corrected their article.

For example, implicit in the statement is the idea that parliament will definitely stop Brexit. Not delay, but stop Brexit. This essentially inflates the perceived risk to Brexit of not proroguing parliament. Which might lead more people to agree with the statement.

There’s also arguably a broader problem with this sort of agree/disagree question as explained here by YouGov’s Director of Political Research, Anthony Wells.

He argues that the statements people have to agree or disagree with can only advocate for one side of the debate and so can lead respondents to agree by default.

In this example, the “benefit” of the Prime Minister taking any means possible, including suspending parliament, to deliver Brexit is clear. Brexit would be delivered.

But the other side of this debate is not spelled out or suggested, for example what might happen if Mr Johnson did not suspend parliament. So the wording used might have made it more likely for people to say they agree with the statement.

And finally, as we say often, this poll is only representative of people in Great Britain (it excludes Northern Ireland, which voted to Remain) as the Telegraph does mention in its article.

After we approached the Telegraph, it amended the top two lines of the article to make it clear that the figures represent only those who had a view on the matter. The newspaper also added a clarification to the article saying this figure excluded ‘don't know’ and refusal responses.