The impressively dry topic of investor-state dispute settlement (ISDS) is at the heart of the debate over a proposed treaty between the EU and US.

ISDS allows companies or individual investors to seek compensation from an independent arbitration panel if another signed-up country breaks an agreement to protect foreign investments. Almost all existing treaties involving guarantees to foreign investors use it.

Both sides want to include it in the Transatlantic Trade and Investment Partnership (TTIP, pronounced 'T-tip').

This is controversial. Campaigners complain about, among other things, a lack of transparency in ISDS proceedings.

Who decides cases, and where?

Using ISDS, a foreign investor that thinks it's been treated in a way that an investment treaty doesn't allow can ask an arbitration panel to decide the matter, rather than having to rely on the courts of the country they're arguing with.

The arbitrators are usually commercial lawyers and academic experts in international law. Unlike full-time judges, they often double up: acting as an advocate for a government or company in one case, handing down decisions in another.

In general, each side will choose one arbitrator, with a third agreed upon or chosen by the organisation hosting the case.

The vast majority of cases are administered by the International Centre for Settlement of Investment Disputes (ICSID), part of the World Bank, or in line with rules published by the United Nations Commission on International Trade Law (UNCITRAL).

Are cases heard in secret?

Like other arbitration panels but unlike most courts, ICSID doesn't make its hearings or decisions public unless the parties agree (although it does publish its legal reasoning and a list of cases).

UNCITRAL, the other major system, was so concerned at the lack of transparency that it changed its rules recently. They now say that decisions must be published, hearings should be public, and third parties (such as NGOs) can make arguments in the case. But this only applies to new investment treaties, and countries can agree to leave this part of the rules out.

Where the new rules don't apply, "the very existence of a dispute can be kept secret if both parties so wish". The EU has included the new UNCITRAL rules on transparency, with some modification, in a draft treaty with Canada that's similar to TTIP.

How many are there?

While the rules on transparency make it hard to be exact about the volume of ISDS cases, campaigners often make claims about how many are taken by investors, and how frequently they succeed.

The most comprehensive breakdown of known cases is held by a United Nations agency, which tells us that they frequently revise and update their records.

At the time of writing, the database showed 608 cases launched between 1987 (when the first was recorded) and the end of 2014. The number has increased markedly in recent years, with 2013 seeing 59 new claims recorded—the highest number ever in a single year.

The increase in ISDS cases can, at least in part, be explained by the volumes of foreign direct investment over the same period, with the growth in ISDS cases and in outward investment following a similar trend. 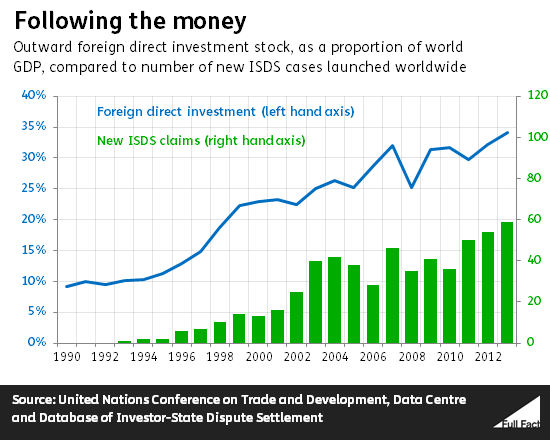 Where do they come from?

ISDS claims typically come from companies based in relatively rich countries; the respondents are more likely to be poorer nations. Investors from the EU and US account for three-quarters of all claims.

Overall, the UN records that EU member states have had 131 known claims lodged against them (around one fifth of the worldwide total). The most frequent respondents have historically been Argentina, Venezuela, the Czech Republic and Egypt.

It's been argued that the most targeted countries are also those which score poorly in terms of legal quality. For instance, Argentina and Venezuela are currently ranked 143rd and 144th (out of 144) in the World Economic Forum's index of "Efficiency of legal framework in challenging regulations".

That situation seems to be changing, though. In 2014, 40% of all new claims were brought against rich countries, and a quarter were between an EU investor and another EU country (11 out of 42).

What are the outcomes?

At the end of 2014, 405 known ISDS cases had reached a resolution. The state won in 36% of these, while most of the rest were either decided in favour of the investor (27%) or settled (26%). Settled cases will typically involve the state paying an amount it is satisfied with, but the exact terms aren't published.

To date there have been 15 cases against EU countries in which the tribunal awarded compensation to the investor, while another 14 were settled. 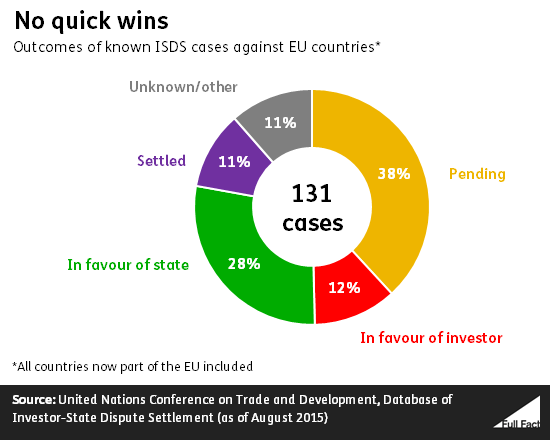 Only two ISDS challenges have ever been brought against the UK. The outcome of one is unknown; the other claim, against the UK and France over the Channel Tunnel, was partially successful.

Even though the governments lost, the case is recorded as 'settled' in our chart above, as that's how it's defined by the UN agency that compiles the figures. It told us that's because the settlement was reached after the finding of liability against the government, but before the amount of compensation was set by the arbitrators.

The companies involved reportedly received around €24 million, although we don't currently know how much, if any, of that the British government paid.

May not end up in TTIP in the usual form

The debate about whether the ISDS system should be included in TTIP is ongoing. The European Parliament has recommended that "the inclusion of any form of private arbitration courts in TTIP must be ruled out".

The EU Trade Commissioner has expressed support for a permanent court to replace the ISDS procedure, and wants TTIP to allow for appeals and changes to how arbitrators are selected. This will have to be negotiated with the Americans over the next few months.

We originally said that the UK had lost neither of the ISDS cases taken against it, on the basis of a UN database. This was incorrect; in fact, a compensation award was made against the UK and France jointly in one case. We've updated our article to reflect this.