Last week, we wrote about the cash support for asylum seekers in different European countries. We said that insofar as it's possible to compare, many EU nations provide a similar weekly rate to the UK.

But when you take into account daily living costs in those other countries, it turns out that in fact the UK is the least generous of the countries we looked at. 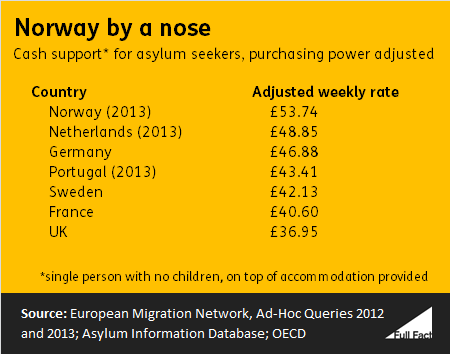 It's hard to make comparisons between different systems. Even taking the most like-for-like payments possible, simply converting them into sterling doesn't show us the differences in what those payments buy.

As a single asylum seeker with no children, you might get the equivalent of £56 a week in Norway to pay for food and other living costs, but that doesn't mean you have the same standard of living as you would on £56 a week here.

A basket of goods that costs £1 here currently costs £1.07 in Norway, according to the Organisation for Economic Co-operation and Development.

That's not a huge difference, so Norway's rate still looks comparatively generous—the equivalent of around £54.

But in countries like Sweden, France, Germany and the Netherlands, consumer goods and services cost less than they do in Britain. So while their weekly rates for asylum seekers look similar to the UK in cash terms, the money goes further in all those countries.

Even these adjusted rates don't factor in different allowances for families, nor tell us about asylum seekers' varying access to the likes of public healthcare, education, employment, integration programmes and one-off supplies on arrival.