Is the UK going to become the EU’s tax collector?

UK government proposals for a customs agreement with the EU unveiled this week would involve collecting taxes on goods at the UK border, set at either the UK or EU rate.

Proposals published by the government outline, among other things, a “facilitated customs arrangement” which will be phased in to replace the current relationship the UK has with the EU as part of the customs union.

At the moment, being part of the EU customs union means that there are no barriers to trade—for example in the form of import or export taxes—on goods moving between EU countries. It also means that all EU countries charge the same tariffs on goods entering the EU from the rest of the world.

The government’s position is that, once we leave the EU, the UK will also leave the customs union.

The government says the “facilitated customs arrangement” would secure “the most frictionless trade possible in goods between the UK and the EU, while allowing the UK to forge new trade relationships with partners around the world.”

It says the plan would ensure that the correct customs rules are applied and taxes have been paid on goods destined for the EU via the UK. When goods come into the UK they will need to show which country they are bound for. If this can be shown clearly by a “trusted trader” then they will need to pay the UK government the appropriate level of tax—either the UK’s level or the EU’s depending on the destination.

If the destination of the goods can’t be shown clearly then the trader will need to pay whichever tax is higher—the UK’s or the EU’s. Once it reaches its final destination the trader can then apply for a refund from the government if it turns out they paid the wrong rate.

The government has also proposed that “Where there is a material risk of circumvention of higher UK tariffs, the UK would make it illegal to pay the wrong tariff, and use risk and intelligence based checks across the country, rather than at the border, to check that the right tariffs are being paid.”

The government's proposals say that “The UK and the EU should agree a mechanism for the remittance of relevant tariff revenue [...] the UK proposes a tariff revenue formula, taking account of goods destined for the UK entering via the EU and goods destined for the EU entering via the UK. However, the UK is not proposing that the EU applies the UK’s tariffs and trade policy at its border for goods intended for the UK.” 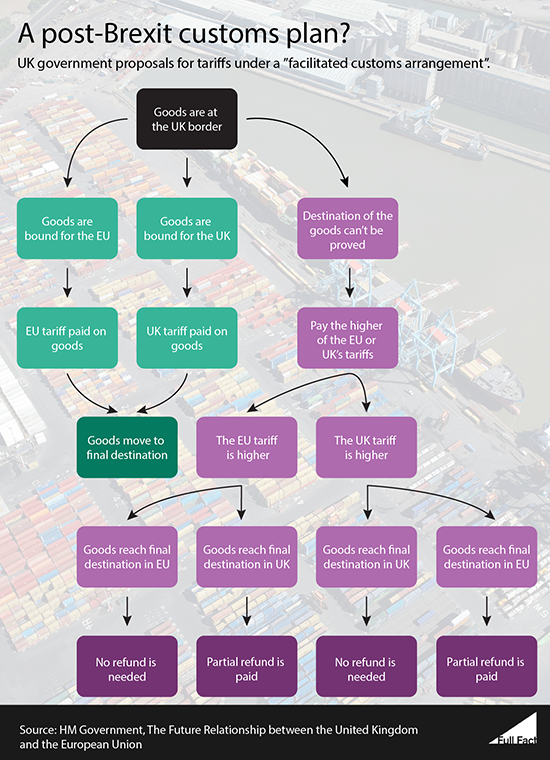 The government has also proposed that there will be no taxes on trade directly between the UK and EU and traders wouldn’t normally need to prove where the goods came from—this is based on the fact that the goods should have already been checked and taxed at the appropriate level when they entered the proposed UK-EU free trade area.

The government says these proposals “would enable the UK to set its own tariffs and vary them as it chooses”.

The EU is considering the government’s proposals and will meet next week to discuss them further.