It's 31,000 including family members, the sixth highest number in the EU. Adjusting for population size, the UK is 18th out of 30 European countries.

The broad picture is right, but Mr Sutherland understated the number of asylum seekers that the UK gets, in comparison to other EU countries, when he spoke to the BBC's World at One about the Calais situation.

The figures given correspond to the number of people applying for international protection for the first time in 2014, including family members. But the UK has around 31,000 applicants, not 24,000, in those statistics.

So Mr Sutherland seems to be comparing the total number of asylum seekers in these countries with a subtotal in the UK.

We've asked his office for a comment on whether this is right, or if he's using a different source (we're working from Eurostat figures).

On a like-for-like comparison, the EU countries receiving the most first-time asylum applicants in 2014 were as follows: 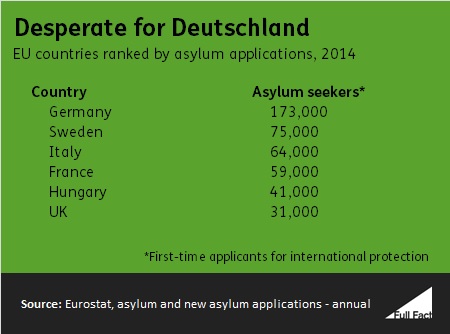 The UK is the sixth highest in the EU in terms of both people applying and people accepted for international protection.

In terms of asylum applicants as a share of population, the UK is 18th out of 30 European countries, according to the EU Asylum Support Office. There were 494 applicants per million inhabitants here in 2014; at either end of the scale, Sweden had 8,417, and Portugal just 42.