What do businesses think about the EU referendum?

It’s difficult to get a representative picture of UK business opinion about the EU. As far as we’re aware, there aren’t any surveys that offer this on the UK’s membership of the EU.

The Confederation of British Industry has pointed to 19 polls which it says show “all polls bar none show a majority of businesses want to remain in the EU”. These all face the same limitation—the vast majority are surveys of membership organisations, and the rest aren’t designed to be representative of the opinion of all UK businesses. They include:

These surveys also often weren’t conducted in a way which made them representative of the types of businesses they were surveying, let alone of all businesses generally.

For example, the latest British Chambers of Commerce member survey showed a big difference in opinion between the exporters they surveyed, who were more likely to favour remaining in the EU, and the non-exporters, who slightly favoured leaving. That makes a difference to its overall results because the number of exporters among the respondents was disproportionately high.

The bigger point here is that is very difficult to work out what types of businesses you’d need to survey, and what weights you would apply, to make the results representative of all businesses. For example, is it better to aim to represent the different numbers of employees of businesses, or how much money they make, or what sector they work in?

As the graph below shows, the different weights given to different business sizes can vary significantly depending on what you’re measuring. 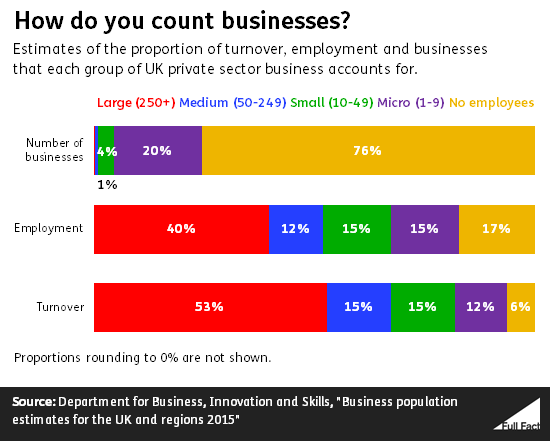 The other significant variation is industry, where different industries will have different levels of trade with the EU.

For all these reasons there are no representative surveys of business opinion on the EU referendum.

Some things we do know

There are some things we do have a more complete answer for.

Well known business people have come out on both sides of the debate, and just as with individuals, different businesses will be affected differently.