What will happen to your vote in the upcoming EU parliament elections?

It isn’t necessary for parties to form tactical alliances in the EU parliament elections.

Smaller parties are disadvantaged by the voting system in Great Britain, so it’s harder to win as many seats as larger, unified voting blocs.

The EU parliament elections this year will be proportional.

“The Green Party has no plans to field joint remain lists … This is also a proportional election, meaning every vote has equal weight. Tactical lists are not necessary. #votegreen2019”

Due to the delay in leaving the EU, the UK is currently set to hold elections on 23 May this year to send 73 members (MEPs) to the European parliament.

There have been suggestions that some parties with similar stances on Brexit should form alliances together for this election. The Green Party has responded by saying that, unlike in Westminster elections, this will be a proportional representation election, and so these kinds of alliances aren’t necessary.

While it’s true that the system used is more “proportional” than Westminster elections, it is not perfectly proportional, it’s not true that every vote carries equal weight. The voting system tends to favour bigger, more unified voting blocs as opposed to smaller, dispersed ones. So in theory, tactical co-operation between parties could potentially change the outcome of the election.

To show why, we’ll explain more about how the voting system works – and even give you a tool to download that lets you simulate how it works for yourself.

How do elections to the European Parliament work?

There are two different voting systems: one for Great Britain and one for Northern Ireland.

For Great Britain, unlike in a Westminster election, you’ll normally choose a party, rather than a particular individual (although individuals can stand as independents as well). Your ballot paper will list a set of parties to choose from.

Your “constituency” is your region—so the North West is a whole region, as are London, Scotland, and the South East, for example. Each of the 12 regions elect multiple MEPs, according to their population (a total of 70 across Great Britain and three in Northern Ireland).

A region’s MEPs can come from different parties: each party submits a list of candidates, ranked in order, and depending on how many seats a party wins in that region, candidates are elected starting with the top of a party’s list, working down.

In Northern Ireland, we use something called the single transferrable vote – that’s where you rank individual candidates by preference.

Is it proportional representation?

Yes and no. Proportional representation describes electoral systems where parties gain seats in proportion to the number of votes cast for them. So, in a perfectly proportional system, a party that wins 30% of votes would win 30% of the seats.

But there are many different types of “proportional” voting system, and some more closely match the vote share with the seat share than others.

In Great Britain, the European Parliament voting system is designed to be broadly proportional.

But because the country is split into regions with a handful of seats in each, there often aren’t enough seats available to deliver a particularly proportional outcome.

Take the North East of England, for example. It’s a relatively small region by population, and elects three MEPs. With only three seats available, the party you vote for could potentially get 20% of the vote and 0% of the seats.

By contrast, the South East of England elects 10 MEPs, so your party is guaranteed a seat with just a little over 9% of the vote.

In Northern Ireland, the system is different, but it has a similar effect: there are just three seats available in Northern Ireland, and four or five parties tend to dominate at the polls. So it’s very difficult to get a proportional outcome there as well. 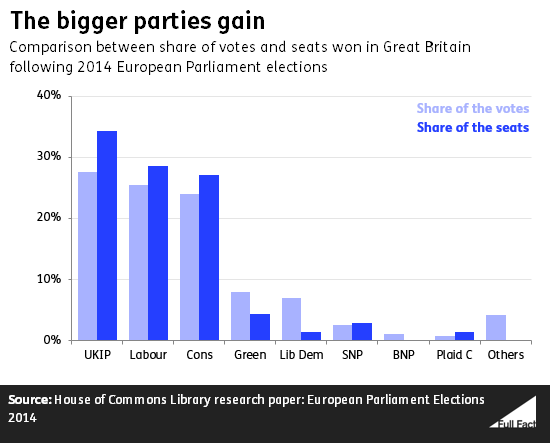 Do votes have equal weight?

Technically speaking, votes in all elections have equal weight. Each eligible person gets one vote and no-one’s vote counts for more than anyone else’s.

But in practice, the effective ‘influence’ your vote has can depend on where you live and what voting system is used.

On the flipside, as it happened only 60% of voters in Northern Ireland ending up getting an MEP from the party they supported. By contrast, 85% of voters in London did.

In a perfectly proportional system with enough seats for every party, every vote could have ‘weight’ in the sense that every voter’s choice can end up being represented. But under these systems, it is still possible that your vote for a party might not result in it gaining any representation.

The final claim is that small parties don’t need to form alliances to win seats at the European parliament elections.

It’s entirely up to parties what alliances they want to form in an election. But because of the way the voting system works, it’s possible for several small parties to get no seats in a region, whereas if their votes had been combined, they could have earned one collectively.

The voting system used in Great Britain for European Parliament elections uses something called the D’Hondt method, which works like this.

That can leave the situation where two or more parties with quite small vote shares get no seats, whereas if they had combined votes they may have won a seat.

For example, in the 2014 European Parliament election the Liberal Democrats got 6.9% of the votes but just 1.4% of the seats. That’s because they tended to have too small a share of the votes in each region across Great Britain to earn any of the limited set of seats available.

You can try out different combinations of parties to see how the system works with our election simulator, which you can download here.