How the EU works: which countries are in the EU? 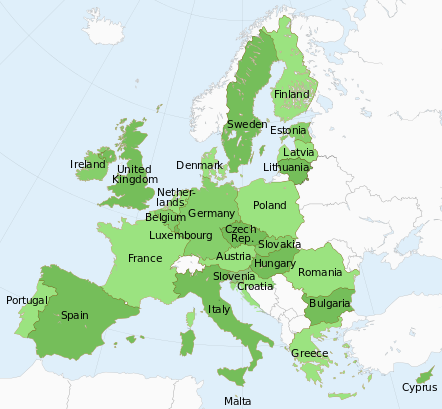 28 countries are members of the European Union, including the UK which joined in 1973. Since its foundation by six countries in 1957, what is now known as the EU has grown in a series of expansions. The largest was in 2004 with ten new members, including many central and eastern European states.

The status of member countries’ overseas territories is varied and complicated. Gibraltar entered the EU along with the UK as a dependant territory, and people there will vote in the referendum.

The eurozone is made up of the 19 EU members who use the euro as their common currency. All member countries are required to join the euro once they have met the criteria, except for the UK and Denmark who have opt-outs.

The EU says any European country can apply to join if it “respects the EU’s democratic values and is committed to promoting them”. Countries must show they have stable political institutions, a functioning market economy, and that they accept established EU law and practice.

Joining the EU has three application stages. Countries must be approved by existing members before they can reach the next stage.

Potential candidates are countries which haven’t started negotiating membership yet, but are promised the prospect of joining when they’re ready. Bosnia and Herzegovina, and Kosovo, currently fall into this category.

Candidate states are countries which are ready to begin negotiations, although they haven’t yet. This applies to Albania and the former Yugoslav Republic of Macedonia.

Map of EU member states, by Ssolbergj, via Wikimedia Commons