Will the European elections decide who's 'in charge in Europe'?

Elections to the European Parliament will be held in the UK tomorrow. But to what extent will the results decide, to quote a poster campaign from the parliament, 'who's in charge in Europe'? 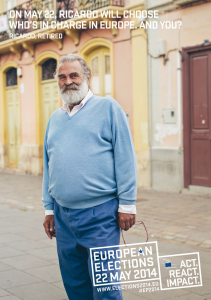 To understand how much influence its newly-elected Members (MEPs) will have, we need to understand both the place of the European Parliament and its members in the law-making processes of the EU, and its powers over other European bodies. In particular, the European Council, Council of the EU and European Commission each have significant influence in Europe.

The Parliament shares control over the passage of legislation with the Council of the EU, which is comprised of ministers from the governments of member states. This legislation is initially proposed by the Commission, which is the body that implements the laws and runs the EU.

Parliament has some control over the Commission, as it must approve appointments and can at a later point vote to dismiss the Commission as a whole. And this year the election results must be taken into account when nominating a President for the Commission, meaning this year's election might influence who is 'in charge' of this body too.

MEPs can amend and vote on the majority of EU laws

The level of influence Members of the European Parliament (MEPs) have over laws depends on whether they are passed using 'ordinary' or 'special' legislative procedures.

Ordinary legislative procedure involves the Parliament and the Council of the EU having equal powers to amend and/or approve legislation. If the two bodies can't agree on a piece of legislation within two 'readings' — opportunities to adopt or amend the proposals — members of both will be brought together in one committee to agree a mutually acceptable proposal. If they can agree on a new version of the law it will face another vote from each body before it is adopted.

Some laws follow 'special' legislative procedures which don't allow the Parliament to make amendments to them. In the case of anti-discrimination law, for example, Parliament can veto or approve legislation but not make changes to it. In other cases such as some involving competition law, it must be consulted but its opinion can be ignored. More in-depth information on these procedures and the circumstances in which they can be used is available on the Parliament's website.

According to the European Parliament, 'the vast majority' of laws are adopted using the ordinary legislative procedure. A report from thinktank the Centre for European Policy Studies says that in 2010 the proportion of new proposals following it was 90%, and in 2011 it was 86%. This follows the Lisbon Treaty of 2009, which expanded the types of legislation subject to ordinary procedures.

MEPs vote for the Commission President, and this year they may help to nominate him or her

This year the President of the Commission, José Manuel Barroso, is stepping down. So the European Council will nominate a new candidate who will become President if a majority of MEPs vote to approve them. The European Council is separate to the Council of the EU, and is made up of the heads of member states rather than ministers.

European Parliament represents the EU citizens that elect it

Council of the EU represents the governments of member states

European Council consists of the head of government in member states

European Commission represents the EU as a whole

The Lisbon Treaty includes a new requirement for the European Council to make its nomination "taking into account the elections to the European Parliament and after having held the appropriate consultations".

As a reaction to that, this year five of the major groupings of MEPs in the Parliament have endorsed a candidate for the presidency. These candidates have been involved in televised debates in the run up to the election. The groupings will be hoping that doing well in the Parliamentary elections will mean their candidate is nominated. Whether this is what happens in practice remains to be seen.

The Parliament has some oversight of other EU bodies

The Parliament must be consulted before the European Council appoints some senior board members of the European Central Bank and the Court of Auditors, although it has no binding powers here.

Parliament also receives speeches from the European Council, Commission, and Council of the EU, and can table questions to the latter two. In certain policy areas the Parliament hosts the relevant Council members for debates. It is also able to send its own President to European Council meetings. If it feels either the Council of the EU or the Commission has acted against EU law it can ask the European Court of Justice to take action, although it has never used this power.

More information on the supervisory functions of the European Parliament can be found on the Parliament's website.