Accident and emergency: attendances and performance 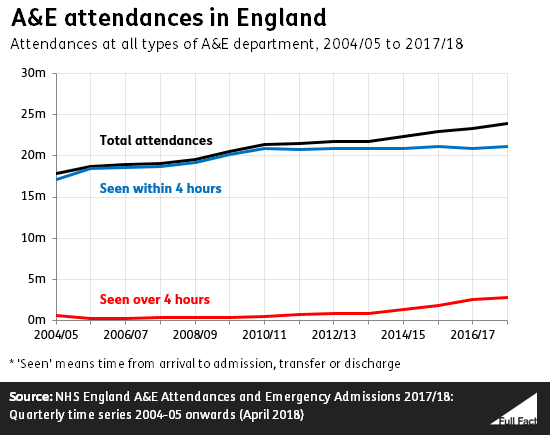 Prior to 2010, the NHS in England had a standard target that 98% of patients should be seen within four hours at A&E departments. This standard was lowered to 95% under the Coalition. 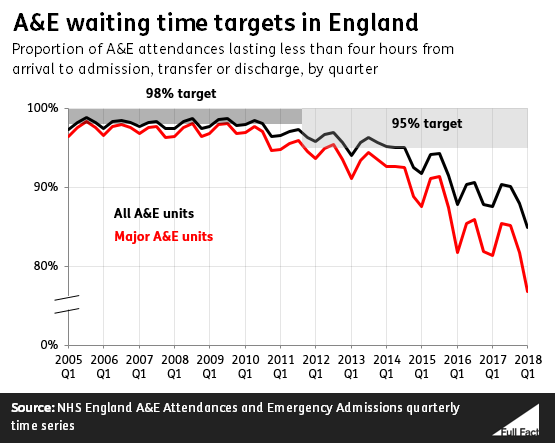 People are also waiting longer on average. In 2017/18, a typical person spent anywhere from around 2 hours 24 minutes and up to 2 hours 40 minutes in A&E (this is the median duration from arrival to departure). Back in 2011 and 2012 this was closer to two hours. 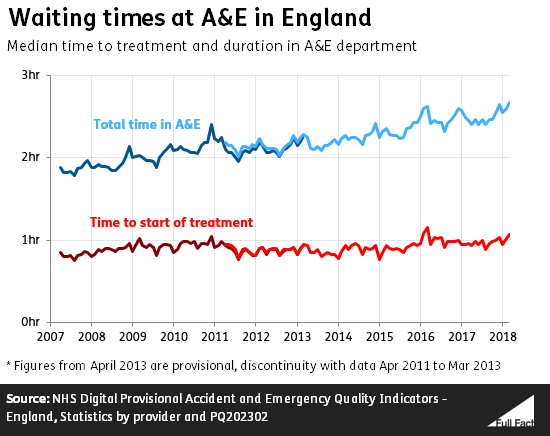 Winter sees the longest waits and most targets missed

Waiting times are longer on average in winter. The same is broadly true for breaches of the waiting time targets, although these are now happening routinely throughout the year. The targets weren’t met at all in 2016 or in 2017. 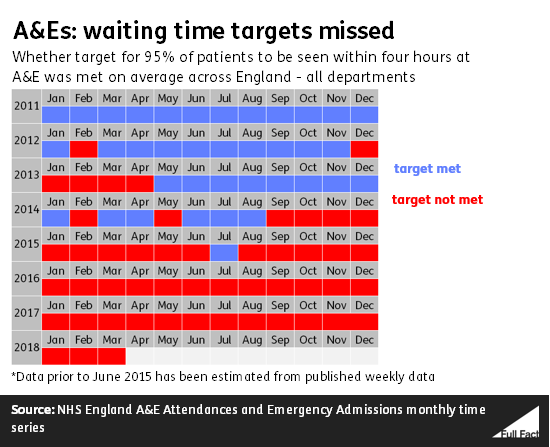 Major A&E departments have fallen below the standard for the majority of the past six years. The national targets are for all A&E units as a whole, not just major departments. 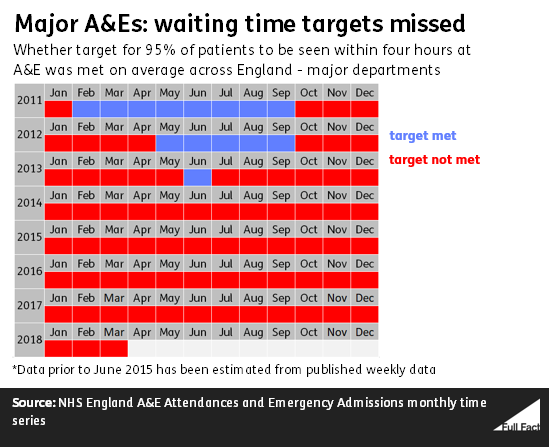 But fewer people attend A&E in the winter

Missed targets and longer waits can't be explained away by the volume of patients at A&E—winter is actually typically the quietest time of the year in terms of the number of patients attending. That said, in winter people are also more likely to need emergency treatment.

More information about the possible causes of struggling A&E departments is available from The King’s Fund, and from a joint publication by the Health Foundation and the Nuffield Trust.

The Nuffield Trust has also cautioned about an "undue focus" in public debate on the four hour target, which it says can distort behaviour in hospitals and detract from the interests of patients or staff.

'Waiting times' aren't all about waiting

A 'waiting time' according to the targets is the time it takes after someone arrives in A&E for them to be either admitted to hospital, transferred to another healthcare provider (maybe to social services or to another hospital) or discharged. It represents the total time someone spends in an A&E department.

That doesn't mean people wait for that whole time. A&E departments treat people during their stay—like dressing wounds, giving out medication, or simply offering advice. This takes time, and it's not time spent in a waiting room.

A typical patient waited an hour to be treated from when they arrived at A&E in March this year (the most recent statistics available). That compares to a total median time in A&E of about two hours and forty minutes. That doesn't mean treatment usually lasts over an hour: this time could involve further waiting (for test results or so staff can monitor a patient).

So we don't know exactly how long people wait, but 'waiting times' often include the time it takes to receive treatment as well.

About four in 10 patients are discharged without follow-up

Being discharged without any follow-up is the most common way people leave A&E. 39% of A&E attendances leave A&E this way. This doesn't mean those people weren't treated during their stay in A&E and doesn't necessarily mean they went to A&E wrongly. 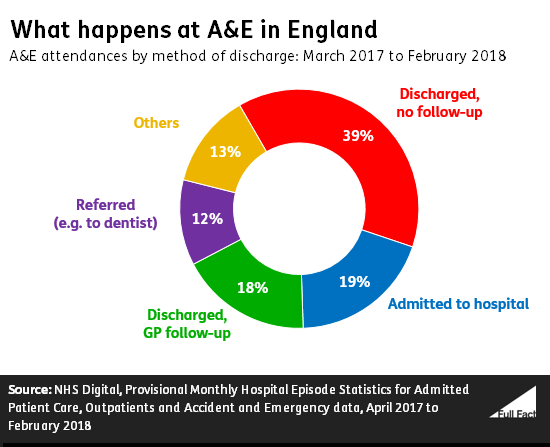