Adult social care is the support provided to adults with physical or learning disabilities, or physical or mental illnesses. This could be for personal care (such as eating, washing, or getting dressed) or for domestic routines (such as cleaning or going to the shops).

This support is provided in various ways. It can be provided through formal care services, including residential care homes or a carer helping in the home. These services have to be paid for, usually by the local council or through private funds. Family members, neighbours, or friends may also provide unpaid care, which is often referred to as informal care.

How many people get adult social care from their council?

Adults of all ages can need extra support in day to day life for various and often complex reasons. There were over 1.8 million new requests to local councils for adult social care in 2015/16, of which just over a quarter were from adults aged 18 to 64. The rest of the requests were from older adults (over 65).

Some of these requests were for “short term support to maximise independence”. Just over 245,000 instances of this kind of short-term help were provided in 2015/16, excluding instances where care was on-going. People receiving short-term support may need it several times in one year—and they are counted each time—so it's not possible to say exactly how many people this equates to.

Just under half of these instances involved people needing help after leaving hospital. The majority involved people receiving physical support with their personal care. 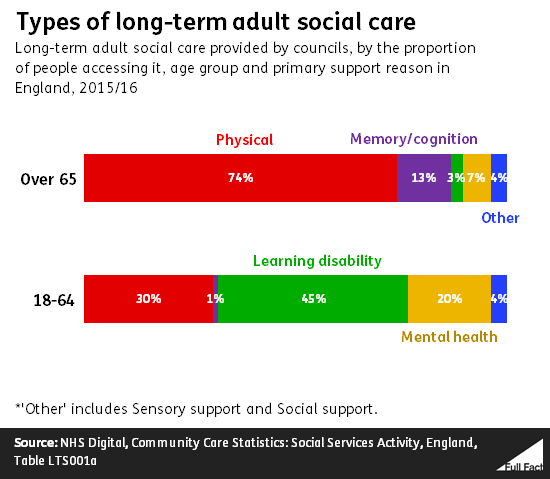 Physical support for older adults was the most common type of long-term care, making up 74% of all care provided during the year. This is followed by support with memory and cognition (13%).

Learning disability support was the most common type of care given to adults under 65, making up 45% of all care, followed by physical support (30%).

39% of adults over 65 and 17% of adults under 65 receiving long-term care were in residential or nursing homes in 2015/16. The rest largely received services to help them live at home (community care).

How many people receive informal or private care?

Around 2.1 million people in the UK were estimated to have received some level of informal care in 2014, according to the Office for National Statistics. This figure has remained roughly the same since 2005 but the number of hours of care received by these people, particularly those receiving 24-hour care, has increased.

At the same time, the number of family and friends providing unpaid care in England actually appears to have increased. In 2011 the number reached 5.4 million—it was 4.9 million in 2001.

Around 339,000 people received adult social care privately in 2010, according to the National Audit Office.

The demand for social care

But it’s difficult to know exactly how many people actually need long or short-term care or will in the future.

As we have written about before, Age UK have estimated that there are over 1.2 million older people who don’t receive the help they need with activities like washing or going to the toilet. These estimates are fairly uncertain: the King’s Fund think tank has warned separately  that “defining, let alone measuring, the extent of unmet need is fraught with difficulty.”

Experts also expect that the demand for care will continue to increase. Official estimates suggest there will be around 2.2 million more over 65s in 2027 compared with 2017. Not all of these people will need social care, but this is expected to increase demand on social care services because the risk of health problems increases with age.

Who pays for social care?

The provision of government-funded social care is decided after an assessment looking at the severity of someone’s need and their ability to pay.

At the moment people who apply for adult social care who have wealth of less than £14,250 are eligible to have their council pay for their care. For those with wealth up to £23,250 the council may pay for some of their care.

Councils are not required to help anyone with more than £23,250 in wealth, so people falling into this category have to pay for their social care privately.

At the moment whether or not the value of your house is included in these means tests depends on whether the care you need is at home or in a residential or nursing home.

We’ve written more about where councils get the money to pay for social care from here.