More than a quarter of English adults are now obese.

Admissions for obesity have more than doubled in the last four years.

“Admissions for obesity have more than doubled in the last four years and more than a quarter of English adults are now obese.”

There were around 11,000 admissions to hospital in England in 2016/17 where the primary diagnosis for the patient was obesity. That’s around the same level as it was in 2012/13 (though it did drop in the intervening years).

But having a secondary diagnosis of obesity doesn’t necessarily mean that’s what the patient has been admitted to hospital for.

According to NHS Digital “A secondary diagnosis of obesity does not necessarily indicate obesity as a contributing factor for the admission, but may instead indicate that obesity is a factor relevant to a patient’s episode of care”.

So it is not correct that these are all admissions “for obesity”, but rather where obesity was a factor in some way relevant to the patient’s care. 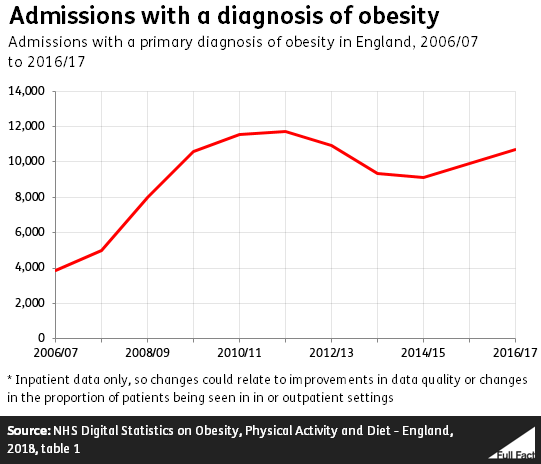 These admissions don’t represent individual patients, as one patient may be admitted several times in a year. It also only counts patients once their period of hospital admission has ended.

NHS Digital also say that the way the figures are collected has improved over this period which may be reflected in the increasing numbers.

26% of adults in the England are obese, according to a 2016 health survey

The Health Survey for England 2016, interviewed 8,000 adults and 2,000 children and their heights and weights were measured to calculate their BMI. The results were then weighted to be representative of the wider population.

BMI was used to indicate whether people were underweight, a healthy weight, overweight, obese or very obese.

26% of men and 27% of women were found to be in the obese category, with BMIs over 30. This means they were either obese, or morbidly obese if they had a BMI over 40.

In their report, NHS Digital said that the “proportion of adults who were obese has been similar since 2010” at around one quarter. 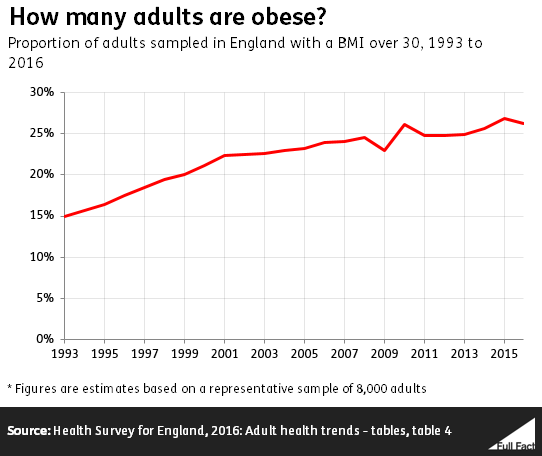