Are there 13 deaths by suicide every day?

There are 13 deaths by suicide every day in England.

“On average, 13 people kill themselves every day in England”.

This is correct based on 2015 figures.

Statistics from the Office for National Statistics (ONS) show that there were 4,820 deaths by suicide registered in England in 2015. That averages out at around 13 per day. 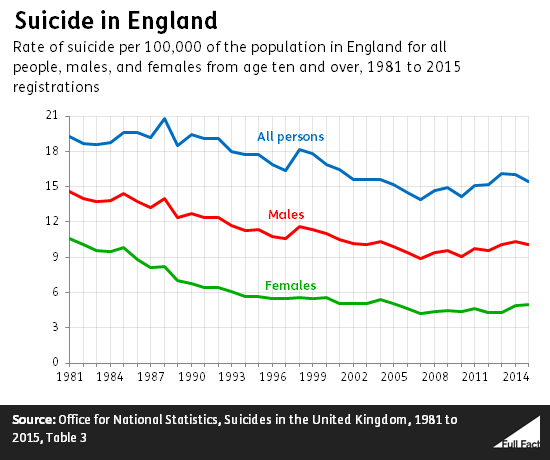 The figures count registrations rather than deaths

The ONS points out that deaths by suicide in England and Wales can only be registered following an inquest, which can take months or even years. This means that not all of the deaths reported in these figures will necessarily have happened in 2015. Some may have happened in 2014 or even years earlier. Similarly there will be deaths in 2015 which may not yet have been registered, as an inquest wasn’t complete by the end of the year.

The ONS also says that “suicide includes all deaths from intentional self-harm for persons aged 10 and over, and deaths where the intent was undetermined for those aged 15 and over”.

The Samaritans’ helpline is available at all hours and can be contacted free on 116 123, or you can email jo@samaritans.org