Almost a third of children aged 2 to 15 are overweight or obese.

An NHS survey estimates that 28% of children aged 2 to 15 in England were overweight or obese in 2016.

29% of girls were estimated to be overweight or obese, and 26% of boys were.

Being overweight or obese is defined in terms of body mass index (BMI)—essentially weight divided by height. A child’s BMI is measured against a reference chart of BMI levels from 1990. A child whose BMI is in the top 5% of that chart is considered obese, and those in the next 10% down are considered overweight.

The NHS says BMI “is a good way of finding out whether a child is a healthy weight” but also that “The BMI can't tell the difference between excess fat, muscle, or bone.” They say it is “a straightforward and convenient method of assessing someone's weight” and can be used as “a starting point for further discussion with your GP about your weight and your general health.”

These figures are estimates, based on a survey of adults and children in England, and should not be treated as exact.

The estimated level of overweight or obese children has remained quite stable in recent years. Levels were highest in the mid-2000s, and since 2006 they have fluctuated between 28% and 31%. 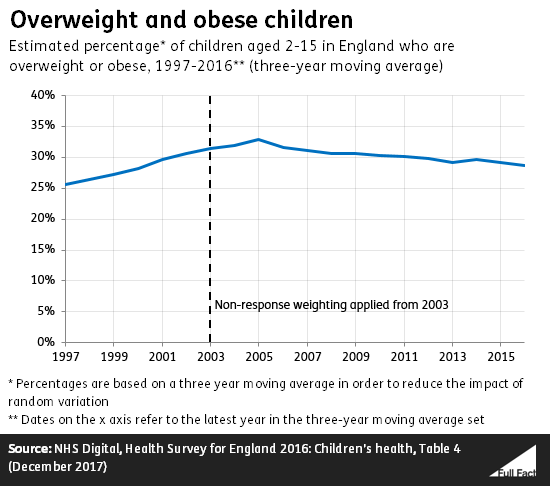 There are other assessments of obesity

The National Childhood Measurement Programme (NCMP) is another assessment of childhood obesity, focusing at children at two specific age points: children in Reception, aged 4-5, and in Year 6, aged 10-11.

Because it’s based on a larger sample size, and focuses on two specific age points, the NCMP data allows for more detailed assessments. The House of Commons Library reports that, based on the NCMP data, “children in the most deprived areas are around twice as likely to be obese” as those in the least deprived areas, both at age 4-5, and 10-11.

The most and least deprived areas are defined those in the top and bottom 10% in terms of the 2015 Index of Multiple Deprivation, published by the (then) Department for Communities and Local Government.

The rest of the UK

In Wales, an estimated 27% of children aged 4-5 were overweight or obese in 2016/17, based on the Childhood Measurement Programme for Wales.

In Northern Ireland, an estimated 23% of 2-10 year olds and 29% of 11-15 year olds were obese or overweight in 2016/17. But this is a very uncertain figure. It’s based on a relatively small sample size, meaning the actual figures could be significantly higher or lower. In the last few years, around a quarter of children aged 2-10 have been estimated as overweight or obese, and a similar proportion of 11-15 year olds have been as well.