Government misses one of its Covid-19 test targets

We don’t know. Fewer than 10,000 people were tested on each day in March, but that could have involved more than 10,000 tests. Data on the number of tests only started to be published in full on 6 April.

Yesterday morning on BBC Breakfast, Labour leader Keir Starmer said that the government was missing its target of 25,000 Covid-19 tests a day by mid-April.

That’s correct. The government initially set a target for 25,000 tests a day within four weeks, four weeks ago, which it has missed. It did 18,665 tests yesterday and has not done more than 19,116 tests in a day.

It could still meet less ambitious targets which it subsequently set for 25,000 tests a day by “mid to late April.”

At the daily coronavirus briefing yesterday, Health Secretary Matt Hancock said the government had committed to 10,000 tests by the end of March, which it had hit. We don’t know if this was the case because data on the daily number of tests did not start to be published comprehensively until 6 April.

He also claimed that the government had met each of its targets on testing, though he did not mention the target referred to by Mr Starmer which has now been missed.

What was promised and when?

On 18 March the Department of Health and Social Care published a document saying “the government will increase the number of people tested for COVID-19 to 25,000 hospital patients a day.”

It added that “the increased capacity is expected to be ready within 4 weeks.”

Since then, the government has reiterated the commitment to a number of tests, albeit with a more vague timetable.

On 1 April Secretary of State for Housing, Communities and Local Government Robert Jenrick committed to 25,000 tests a day by “mid-April”. The following day the Department of Health and Social Care committed to the target by “mid to late April.”

On 2 April the government also committed to reaching 100,000 tests per day by the end of April.

The aim to do 25,000 tests a day within four weeks was first announced on 18 March. Four weeks later on 15 April (yesterday) 18,665 tests were performed, with 13,839 people tested. The number of tests has not surpassed 25,000 on any single day, meaning the government has missed that target.

The government could still meet its more vague “mid-April” or “mid to late April” targets to achieve 25,000 tests per day. 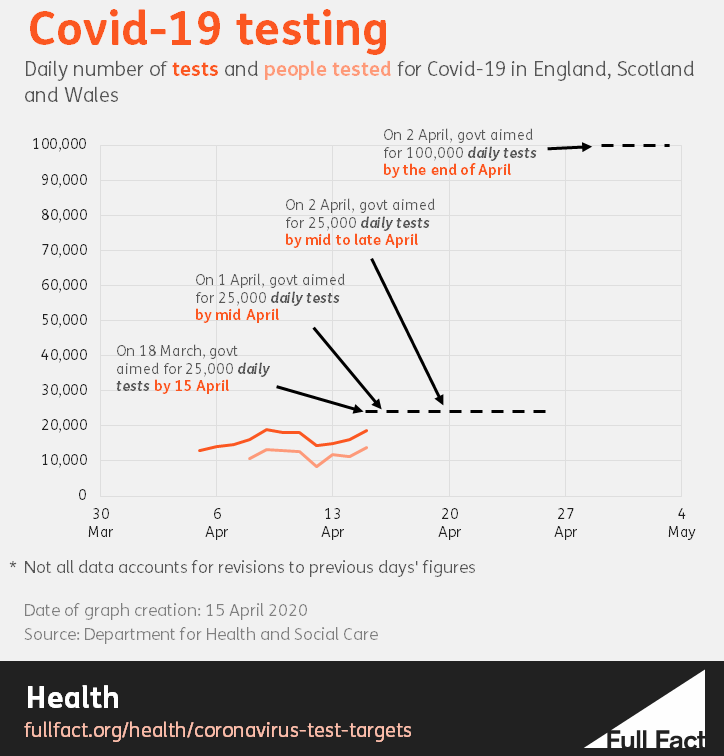 While ministers have consistently set targets in terms of the number of “tests”, the gov.uk website didn’t actually publish this information until 6 April (for data starting the day before).

It had been publishing figures on the number of people tested. But because people can be tested more than once, we didn’t know how many tests had taken place.

At the same time, Public Health England (PHE) was tweeting out figures on the number of tests, but this did not cover all nations of the UK, and it wasn’t published every day.

The highest number of tests PHE tweeted was 9,114 in England in the 24 hours to 9am on 28 March, though it could have exceeded 10,000 on one of the days PHE did not tweet the figure.

So when Mr Hancock tweeted on 29 March that we had reached 10,000 tests a day, the data wasn’t there to back him up.

Government figures showed that we certainly hadn’t tested 10,000 people in a day, but with incomplete data on the number of tests it was impossible to say whether Mr Hancock was correct or not.

When Full Fact asked Public Health England for this data, it directed us to its dashboard, which did not and still does not contain data on the number of tests.

When we pointed this out, PHE finally told us, a week later on 6 April that the data was not available, though the figures then started to be published on the government’s website later that day.

Even with that data being available, there are still issues.

Secondly, the data is not easy to access. Each day the total and daily number of tests is published on gov.uk, but this completely wipes historic data, and there’s no daily data available before 5 April.

We urge gov.uk to publish a historic time series for the number of tests, updated on a daily basis and work with Northern Irish authorities to ensure its data can be incorporated in future.