You may have received your annual council tax bill through the door in the last week or two. If you have, you may also have noticed that it mentions the amount of council tax being paid towards the adult social care precept.

What is the adult social care precept?

In 2015 English councils were given the power to increase council tax to pay for social care services for adults. These are services which help people with physical or mental disabilities or mental health needs carry out their daily routines.

The government also limits increases to what we might call core council tax to 2% as well. If they want to increase it by any more than these levels set by government, councils must hold a local referendum.

Using the precept, councils raised £382 million last year, although not all councils used it. Of the 152 councils responsible for social care in England there were eight that chose not to use the adult social care precept.

It’s expected that the precept could raise £1.7 billion a year for social care by 2019/20 if all councils chose to use it. Almost three quarters of councils have chosen to increase council tax by the full 3% related to adult social care, according to the Local Government Association. Not all councils will be able to raise the same amount though and we’ve written more about that here.

There are other ways that councils get money to pay for social care, including specific government grants, money from the NHS, and from their general pool of funding which they’re able to spend on any services they choose.

How does that affect your bill?

Councils have to show how this precept affects you in your council tax bill. We’ve seen a number of comments on Twitter from people questioning the way it’s been worked out, though. 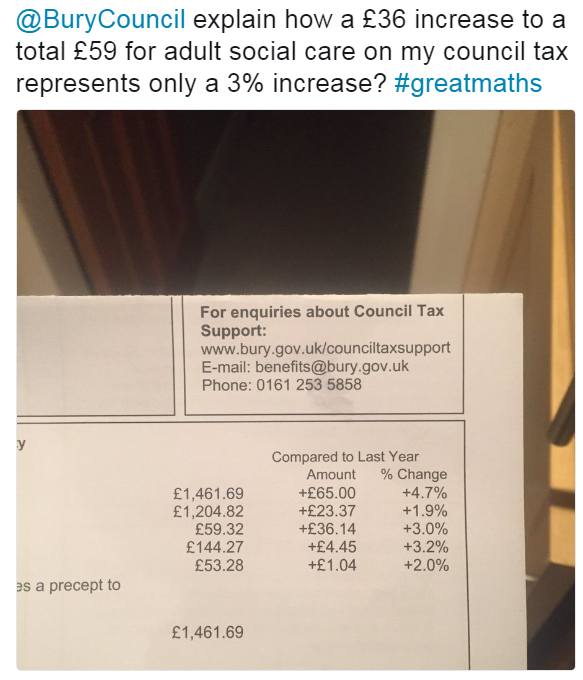 What seems to be causing problems is the bit stating the percentage increase in the adult social care precept compared to the previous year—3% in Bury council’s case—pictured above.

Some people have taken this to mean that the chunk of the bill going towards adult social care has increased by 3% compared to last year. But, confusingly, it doesn’t mean that.

Broadly speaking, the core council tax part of your bill from last year is looked at, the council works out 3% of it (if it’s raising the maximum), and then adds that much on to your bill for this year. That amount will then be used specifically to pay for adult social care.

Even more confusingly, in this case Bury council seems to have looked at this year’s bill to work out the 3%, rather than last year’s. We’re seeking clarification.

So how does the bill work? Well, it should have a few lines breaking down the different amounts included in your bill. This will include the amount in your bill that is going towards adult social care this year; it may also show you how the amount has changed between last year and this year.

Using figures from a hypothetical council tax bill in Stafford we can see how this would work in practice. Staffordshire County Council is responsible for adult social care in the borough, along with a range of other services.

In 2017/18 the council tax increase linked to adult social care in Staffordshire County is 3% as they’ve chosen to increase it by the full amount. So that’s 3% of the £1,088.65 paid last year, or £32.66. In the case of our Stafford council tax bill, it will add together the amount generated from the increase the year before with the increase for this year. That’s £53.61 altogether.

So in this case the adult social care part of the bill has increased by 156%, but the bill might still say “3%” referring to how the increase in the bill was calculated.

There are also other amounts in the bill which go towards things like Stafford Borough Council, Staffordshire Police and Crime Commissioner and Stoke-on-Trent and Staffordshire Fire Authority.

The problem, spotted by people on Twitter, is that the use of percentages in the bill isn’t consistent. Most parts of the bill only show the percentage increase in that specific line of the bill compared to last year. It seems, at least on some bills, the part going towards social care is explained using  a different kind of percentage—the percentage mentioned in that line is 3% of last year’s core council tax.

We’ve amended this piece to explain the difference in the types of percentage used on a council tax bill more clearly.