The new vaccination card is not a ‘Covid passport’

The NHS Covid-19 vaccination card will be used to prove who has been vaccinated.

This is not true. The card contains a record of someone’s vaccination and a reminder of their second appointment date, but it does not contain secure personal information so it cannot prove who was vaccinated.

People who receive the NHS Covid-19 vaccination card must keep it with them all the time.

This is not true. People are not required to carry the card. 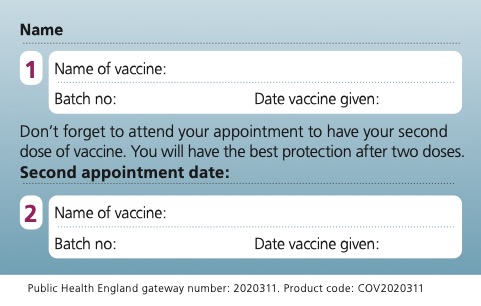 Several media outlets have wrongly described the new NHS Covid-19 vaccination card, and how it will be used.

It has been widely suggested that the card gives proof that someone has been vaccinated against Covid-19. (There has been some discussion about whether this might make some people exempt from the rules, or give them access to some venues.)

Kay Burley on Sky News described the card several times as a “vaccine passport” while interviewing the Foreign Office minister James Cleverly. Mr Cleverly did not explicitly deny this, and when asked about the cards he did talk about “unlocking people’s lives”, which the Evening Standard and Mail Online suggested was a sign that the card could be used in this way.

The Mail, along with the Sun and the Scotsman called it an “ID card”. “It is not clear if the new Covid cards will be mandatory or if they will be used as a kind of ‘immunity passport,’” the Sun said.

The Express also described the card as “the Coronavirus card you will have to carry with you at all times” (and the Essex Echo made a similar claim).

While we can’t say definitively whether “immunity passports” will be introduced, the government says it currently has no plans to do so, and it is not the purpose of this card, which could not be used in that way.

What is the card?

Public Health England (PHE) has confirmed to Full Fact that this is simply a printed card with space for someone’s name and vaccination details (shown above) to be written by hand. (This has already been confirmed publicly by the Welsh government for similar cards in Wales.) Many people who have been vaccinated will therefore have a card like this, but there is nothing to stop someone altering or adding to what is written on it. This makes it very unreliable evidence that someone has been vaccinated, and certainly not proof.

PHE told us that the card is intended as a vaccine record card. It records details of the Covid-19 vaccination someone has received, along with the appointment date for their second injection. According to PHE, it is similar to those already used for other NHS vaccinations that involve more than one dose (such as one for the Human Papillomavirus vaccination) and is not intended for any other purpose. 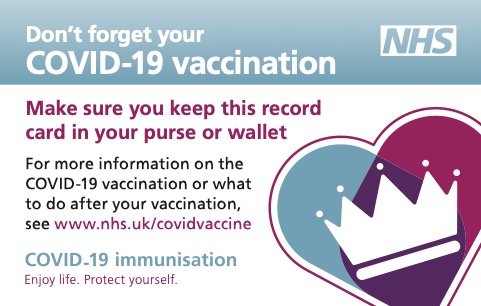 There is no requirement for people to carry the card. This seems to be a misunderstanding of an instruction printed on it, which says: “Make sure you keep this record card in your purse or wallet”.

PHE told us that the card will be useful when someone goes to their second appointment, but bringing it is not compulsory. A PHE leaflet also advises people to show the card to a doctor or a nurse if they feel unwell after vaccination. There is no requirement to show it at any other time.

The Chancellor of the Duchy of Lancaster, Michael Gove, said last week that it is “not the plan” to introduce a Covid-19 “vaccine passport”.

We cannot fact check the future, so we do not know whether such “passports” may become government policy eventually. However we can say that the NHS vaccination card launched today is not a vaccine passport or identity card, and wouldn’t work very well as one, because it doesn’t have any secure personally identifying details.