Vaccines do not raise your risk of catching Covid

A PHE report shows the Covid-19 vaccines have negative effectiveness in the over-40s.

Incorrect. The report contains data that it warns could be misinterpreted in this way. It also says that the vaccines are positively effective.

Vaccines have NEGATIVE Effectiveness in the Over-40s, as Low as MINUS 38%, Shows New PHE Report

A headline on the journalist Toby Young’s website, the Daily Sceptic, falsely claims that a report from Public Health England (PHE) shows the Covid-19 vaccines having “negative effectiveness” in the over-40s. This has also been shared on Instagram. It would mean that the vaccines make these people more likely to catch Covid.

This is not true about the Covid-19 vaccines—nor is it true that the PHE report shows this.

As the Daily Sceptic article itself notes lower down, PHE says its data cannot be used on its own as a reliable measurement of vaccine effectiveness.

The article directly quotes the report, which says: “The vaccination status of cases, inpatients and deaths is not the most appropriate method to assess vaccine effectiveness and there is a high risk of misinterpretation. Vaccine effectiveness has been formally estimated from a number of different sources and is described earlier in this report.”

Nevertheless, the article made this calculation to produce an unreliable estimate of negative vaccine effectiveness in the over-40s.

What did the report say?

PHE has published a series of Covid-19 vaccine surveillance reports this year. In the report published on 9 September, it began to include a detailed breakdown of the vaccination status of Covid cases, hospitalisations and deaths.

The Daily Sceptic article used this data as the basis for some unreliable estimates of vaccine effectiveness.

This data had already caused widespread confusion, because it seemed to show for the month in question (9 August to 5 September) that people in their 40s, 50s, 60s and 70s were more likely to test positive for Covid if they had been vaccinated than if they hadn’t. In particular, a chart displaying the data seemed to give this impression. 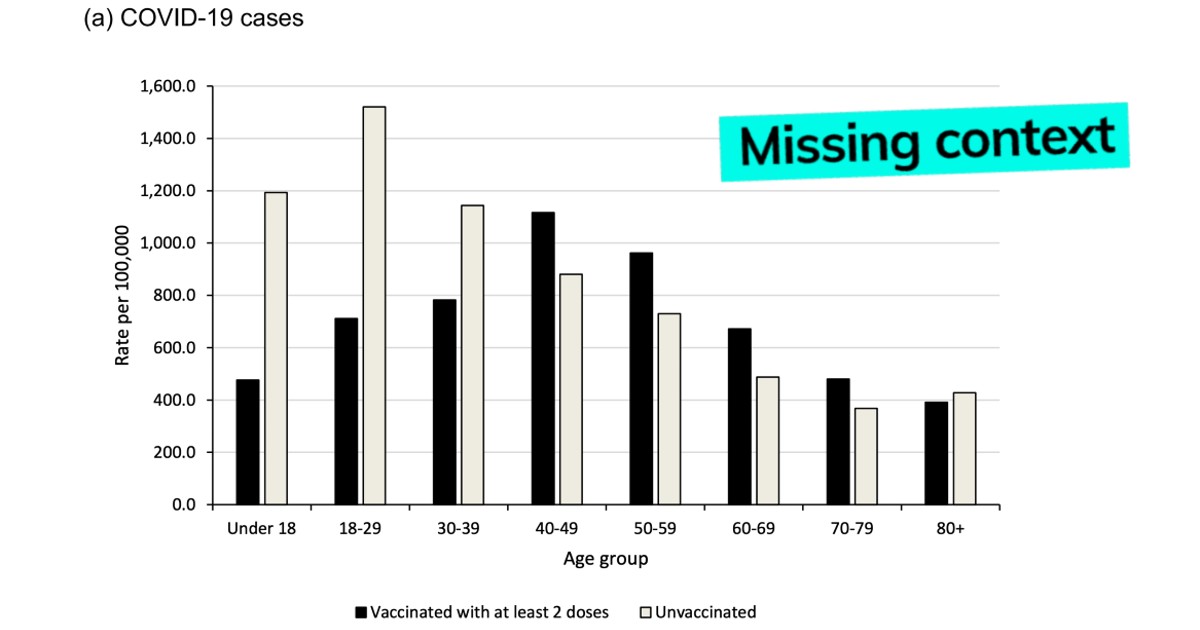 PHE did not add a note to the data tables or on the chart itself to explain that they do not give a reliable estimate of vaccine effectiveness, although a note at the beginning of that section of the report says: “In individuals aged 40 to 79, the rate of a positive COVID-19 test is higher in vaccinated individuals compared to unvaccinated. This is likely to be due to a variety of reasons, including differences in the population of vaccinated and unvaccinated people as well as differences in testing patterns.”

How many unvaccinated people are there?

There are essentially two reasons why PHE’s data does not reliably show us the effect of being vaccinated, which PHE’s note does not fully explain.

And with vaccination rates often around 90% or higher in these age groups, the population numbers have to be very accurate, or they can skew the infection rates substantially.

This problem might well affect the PHE report, which uses population numbers drawn from the National Immunisation Management System (NIMS), using GP registrations, rather than estimates from the Office for National Statistics (ONS).

In the latest figures for England, for example, up to 16 September 2021, 24,210,838 people aged 40-79 had received at least one dose of a Covid vaccine. If we subtract this from the NIMS estimate for the population in this age group, it leaves about 3.52 million people entirely unvaccinated. Whereas, if we subtract it from the ONS 2020 population estimate, it leaves about 1.35 million entirely unvaccinated.

So if it turned out that 200,000 unvaccinated people tested positive for Covid in September, we wouldn’t know whether 15% of the unvaccinated population had caught it (using ONS figures)—or only 6% (using NIMS figures). The mathematical modeller James Ward made a similar point on the BBC’s More or Less programme. He has also reproduced the chart to show roughly how it would look if it used ONS population estimates instead.

In short, we don’t have a very good idea what the rate of infection among all unvaccinated people was. The PHE data makes an estimate, based on NIMS population figures, but that estimate could be substantially wrong.

Are these groups the same?

And there is another kind of problem.

These two groups of vaccinated and unvaccinated people have been roughly matched by age, but they might not be the same in other ways. And this might affect their chance of catching Covid for reasons that have nothing to do with the effectiveness of the vaccine.

For example, if people who have already caught Covid are more likely not to get vaccinated—perhaps in the mistaken belief that it won’t benefit them—then unvaccinated people may already have some protection against Covid from a previous infection. This means that the full protective effect of vaccination won’t show up properly in comparison.

On the other hand, it’s also possible that when people have been vaccinated they feel less worried about catching Covid, and so become more willing to do riskier things, like not using masks, or meeting groups of people indoors. If so, this means that vaccinated people could have much higher protection against Covid—but also be much more exposed to the chance of catching it. This in turn would mean that more cases would show up among vaccinated people, making the vaccine itself look less effective than it is.

Again, we don’t know exactly how important factors like these might be, but we do know that the PHE data does not take them into account, so it simply isn’t a reliable basis on which to estimate the effectiveness of the vaccines—as the report said.

The vaccines do work

An estimate of vaccine effectiveness based only on this PHE data is not reliable—but we don’t need to rely on it, because we have other estimates that we can trust instead.

Elsewhere, the same PHE report says: “Estimates of vaccine effectiveness range from around 55 to 70% after 1 dose, with little evidence of variation by vaccine or age group. Data on 2 doses is [sic] indicates effectiveness of around 65 to 90%.”

At the end of August, the Scientific Advisory Group for Emergencies (SAGE) also gave its consensus view on the effectiveness of the Covid vaccines against symptomatic disease.

It said: “For the Delta variant, protection is assessed to be ~45% after one dose of AstraZeneca and ~55% for Pfizer. After a second dose, this increases to ~70% for AstraZeneca and ~85% for Pfizer... The estimate for effectiveness after a second dose of AstraZeneca has been updated to high confidence, as more robust data has become available. Effectiveness for one dose of the Moderna vaccine is assessed as ~75% with low confidence.”

After we published this fact check, we got in touch with The Daily Sceptic to request a correction regarding this claim.

They disputed our fact check and did not issue a correction.

We also contacted Public Health England to make them aware of our fact check. We suggested changes they could make to help prevent this data from being misinterpreted in future.

This article is part of our work fact checking potentially false pictures, videos and stories on Facebook. You can read more about this—and find out how to report Facebook content—here. For the purposes of that scheme, we’ve rated this claim as partly false because the PHE report does not show that the Covid vaccines have negative effectiveness. Indeed it specifically warns against interpreting the data in this way.