Incorrect. 726 people are estimated to have died in England and Wales in 2018 who were either sleeping rough or in emergency accommodation at the time of their death or shortly before.

On the Andrew Marr show on Sunday, Labour shadow chancellor John McDonnell said that 700,000 people who were homeless died on the streets last year.

This is incorrect. The shadow chancellor’s office told us the Mr McDonnell misspoke. He has previously used the correct figure when discussing the issue.

The Office for National Statistics (ONS) estimated that 726 deaths were registered of people who were either sleeping rough or using emergency accommodation (for example homeless shelters or hostels) at or around their time of death, in England and Wales in 2018.

The estimated number of deaths of homeless people has been increasing year on year since 2013, the earliest we have comparable figures for. At that time, 482 people were estimated to have died while sleeping rough or in emergency accommodation. It should be noted that these figures don’t include many people who are homeless, for example those living with family or friends, or in what’s classed as temporary accommodation. 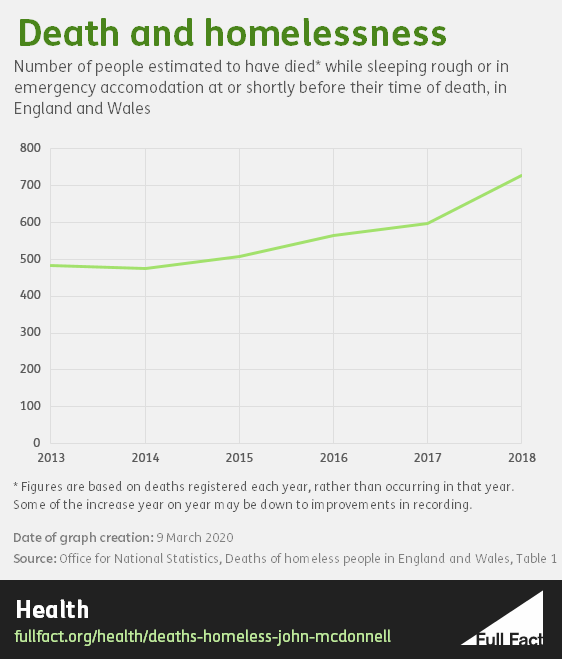 The ONS says some of this increase may be down to improvements in the recording of these deaths.

These figures are all estimates based on death registration figures where the deceased person was aged 74 or under and identified as homeless. The ONS then estimates how many are likely to have not been identified as homeless and adds these on top. It says that because of this method, and the fact that there may be some people aged 75 or over who died while homeless, the estimate is a “robust but conservative” one, and the actual figures may be higher.

The estimates are also based on figures for deaths registered in that year, so depending on how long they took to be registered, the deaths themselves may not all have happened in the same year.

We got in touch to request a correction regarding a claim made in the Express.