Correct according to new estimates for England and Wales. The Office for National Statistics says this is a conservative estimate and the real number may still be higher.

An estimated 597 homeless people died in England and Wales in 2017, up 24% since 2013, according to new figures released by the Office for National Statistics (ONS).

The ONS says the figure is a “robust but conservative estimate, so the real numbers may still be higher.” 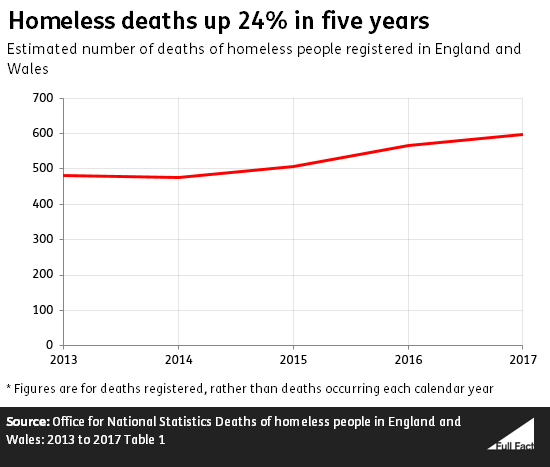 Men made up the majority of the people who were homeless who died in 2017—84%. 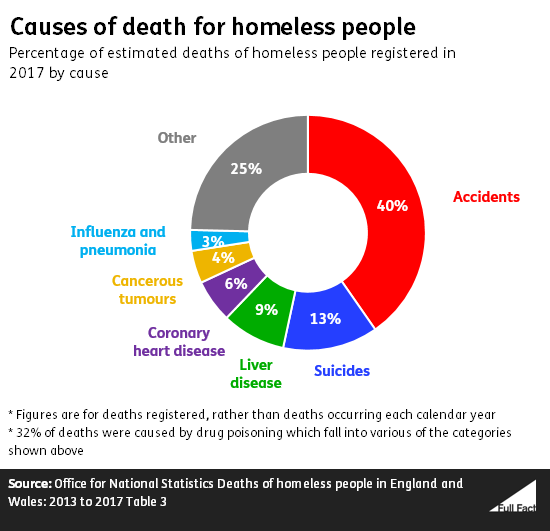 The ONS said that “Our findings show a pattern of deaths among homeless people that is strikingly different from the general population… More than half were related to drug poisoning, suicide, or alcohol, causes that made up only 3% of overall deaths last year.”

How reliable are these figures?

There are different definitions of homelessness, and in this case the ONS refers to “mainly people sleeping rough, or using emergency accommodation such as homeless shelters and direct access hostels, at or around the time of death.”

Because this definition differs from the one used to measure the total number of “homeless” people and from the number of those people who are “rough sleeping”, the ONS says it was unable to calculate a death rate for homeless people.

The figures also show the number of deaths registered each year, rather than deaths occurring each year. Because of the time it takes for an inquest to be completed—which happens in around 12% of cases when a person who is homeless dies—not all deaths will be recorded in the same year as they happened. This also means that not all deaths in 2017 will have been recorded yet.